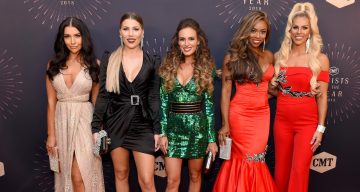 All you reality show fans out there, don’t be sad that Keeping Up with the Kardashians is over for the season! There’s a brand-new TV show coming up in the New Year, and it’s a never-been-done-before concept. Racing Wives is the newest CMT show, and we can’t wait to share details on the cast members who live the glittery life behind NASCAR’s grimy races! Amber Balcaen is not a racing wife but a racer herself; read all about Amber Balcaen in her wiki below.

Amber Balcaen is a NASCAR racer, and the first Canadian female to win a NASCAR-sanctioned race in the U.S. She has racing in her blood but is struggling for a marketing sponsorship. And you can watch her and her battle to stay above the rest on the reality show. Viewers will be treated to a whole new world of racing, behind-the-scenes action, and the unspoken hierarchy that exists, on Racing Wives.

Amber Balcaen was born on March 7, 1992, making her age 26. She was born in Winnipeg, Manitoba, Canada, and is a third-generation racer. Her father, Mike Balcaen, is a 48-time track champion, and her maternal grandfather, Lou Kennedy Sr., is a racing Hall of Famer.

Amber’s mom, Kim Balcaen, has always encouraged her to take up racing and supported her throughout her journey to the top.

From her childhood days on a go-kart to making it in the big leagues, Amber has always known that she wanted to be a racer.

She was 10 years old when she started racing go-karts around North Dakota, and at 16, she was able to purchase her very own lightning sprint car.

Her journey from dirt-track racing to asphalt has been incredible, and she is grateful to her family for all the support they have provided her.

Apart from her record of being the first Canadian woman to win in the USA, this NASCAR bombshell has a whole kitty of achievements.

Did you know Amber is the president of her company Amber Balcaen Racing Inc.? She even has her own merchandise, like T-shirts and caps with the ABR logo, which only shows how serious she is in this profession.

She is also a social media influencer, and we’re sure you might have caught her co-hosting the show Cars That Rock.

She’s a spokeswoman for Kal Tire for their winter campaign as well, and has been a celebrity guest on Fins & Skins Classic Adventures with Henry Waszczuk.

The Saskatchewan Roughriders’ Jordan Reaves and Amber have been dating for a while now, and though they are keeping it on the down-low, Amber does give her Instagram followers some glimpses of her loving relationship with the defensive lineman.

The couple has been dating for little over a year, but the details of how they met are still unclear. However, we do know that from the magic moment they met at a lake, they only grew stronger together.

So, if you were wondering who Amber Balcaen is married to, she’s not a wife yet—but you never know when the couple might announce the big news.

. . Happy 1 year beautiful.♥️ I never thought after 1 week together at the lake I would’ve fallen for you. There was no question in my mind that I wasn’t going to let you get away. 1 year later and I’m more in love than the first day. We’ve done more together than I’ve ever done my whole life. What I love about you most is when I was at rock bottom in my life or at the highest moment, you’ve never changed or switched up how you cared for me. I’m happy we started talking when we did and can’t wait to see what our future holds. ♥️ .

Reaves was accused of trafficking drugs back in 2015, when his career took a major hit. Not only that, but he also became depressed and stressed out over the serious charges.

He was pulled over by a cop in November 2015 and was alleged to have cocaine in his possession for the purposes of trafficking.

His co-accused, Seif Ali, pleaded guilty to the same charges. But in January 2018, there was a sigh of relief when Reaves was acquitted of all charges and walked out of the courthouse an innocent man.

Reaves was removed from the Roughriders roster when he was charged, but the team decided to take him back after his acquittal.

. . 1st American Thanksgiving in my new home, North Carolina. November 20th 2017: One of the worst days of my life. The day my trial began. At this point in life I had hit my rock bottom and felt like there was no coming back…I had worked so hard to get to the CFL only for a POS to put me in the worst situation ever. I was depressed and sad all the time. November 20th 2018: After an amazing season with the Roughriders, Amber, Hugo and myself packed up the car and headed down south to North Carolina to start a new chapter in our lives. This past year has been crazy and it started at rock bottom. After perseverance and the love and support by my friends and family, I made it to this amazing point in my life. I wouldn’t change one of my friends or family members for anyone else. Thankful for all of you ♥️ .

Amber’s IG account is full of pictures that can inspire even the most cynical of us. She has achieved so much over the years and has shown the world what a woman can do in a so-called man’s world.

She constantly posts pictures of kids asking for her autograph or to talk to her and says that these moments are what makes everything worthwhile.

Also Check: Some of the Hottest Pics of NASCAR’s Diva Danica Patrick

Amber is a good-looking woman, and she makes sure she’s never caught on the wrong side of that camera!

Whether posing for a shoot with her sponsors Simpson Race Products or just taking a selfie, she’s always ahead of the IG photo game.

Here are some of her interesting posts:

My #1 choice of outfit, ANY DAY ? @simpsonraceproducts

Had so much fun riding a dirt bike out on the track today!!! If it’s got a motor and wheels I’m about it ? Big thanks to @jamieroutley93 @jimmydecotis for letting me ride their bikes and for the moto gear. Now I wanna buy a dirt bike so I can ride all the time ??

Without risk, there is no reward. Without effort, there are no results. . Putting everything you have into the something can be scary. Putting yourself out there for every one to see, failures and all… that’s even scarier. . But none of that is scarier than regret. . When things are different, or new, not everyone is going to understand your moves. . Regardless, others opinions should not be a determining factor when it comes to how much effort you put into something, which opportunities you take, or which path is best fit for you. . Don’t let the small thinking of others cut your life down to size. . Think big. Aim high. . To reach new levels you have to step out of your comfort zone. Great things can’t be achieved without courage and effort. . Effort it cool. Regret isn’t. Be fearless in the pursuit of your dream. . #motivationmonday

Off season training in full effect. Don’t think I could make it to the gym some days without the help of @1stphorm pre work out? Also Check out these #1stPhorm leggings? they fit like a glove! #WerkItWednesday #humpday #duespaid #neversettle

She’s the Only Racer in the Cast of Racing Wives

It might have been a hard decision for the production team to bring on the little-known Amber—she is the only cast member who is not a racing wife. In fact, she’s not a wife at all! But that shouldn’t stop her from anything, as she’s adding great value to the show.

She’s here to prove that women can do anything they put their minds to, and that no particular sport should be male-dominated.

Yesterday we officially wrapped the first season of @cmt #RacingWives !.Never did I think racing would lead me to such…

While the Busch sisters-in-law Samantha and Ashley might take up a whole lot of screen time on the show, we’re sure the rest of the cast, i.e. Whitney Dillon and Amber, will make an impact.

Apart from the main wives, the show will also feature some of the Monster Models, who are basically NASCAR cheerleaders, and they come with insecurity-inducing looks!