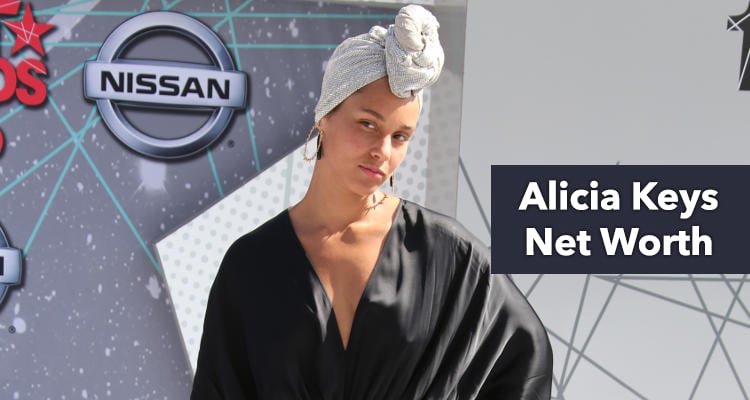 Famous singer Alicia Keys started her career in Hollywood with her debut album, Songs in A Minor. Her net worth is a whopping $130.0 million.

Alicia’s debut album sold over 12 million copies worldwide. If you are searching the Internet for information about Alicia Keys including, “Alicia Keys’ net worth,” “Alicia Keys’ age,” and “is Alicia Keys’ pregnant?” then you have come to the right place! Because we will provide you with all the Alicia Key’s details you need, including the breakdown of her net worth.

How Much is Alicia Keys Worth?

Born as Alicia Augello Cook on January 25, 1981 in New York City, New York. (You’re singing her classic “New York” riff in your head now, aren’t you!) If you curious about Alicia Keys’ age, then let us tell you that the talented singer is 35-years-old. Alicia is the only child of Craig Cook, who is a flight attendant and Teresa, a part-time actress and paralegal. Alicia is of biracial heritage, as her mother is of Scottish, Irish, and Italian descent, while her father is Jamaican. So, that’s where those beautiful mixed features come from!

Alicia Keys’ family includes her mother and father, who separated when she was two-years-old. After her parents separation, she stayed with her mother, who raised her in New York. Since a very young age, Alicia was into acting and singing. In 1985, when Alicia was four years old, she actually appeared in The Cosby Show!

Alicia’s mother was very keen on sending her daughter to music and dance classes, so it’s no wonder she is such an amazingly talented artist. Since the age of seven, she started going for classical piano and even learnt how to play various composers such as, Beethoven, Mozart, and Chopin. At the age of twelve, she gained admission to the Professional Performing Arts School. Alicia majored in choir and started writing songs at the age of fourteen. When she was sixteen, Alicia graduated as a valedictorian.

Alicia Keys’ husband is Kasseem Dean, known by his stage name as Swizz Beatz. Initially, the couple kept their relationship under cover, however, in the year 2009, it was confirmed that Alicia was dating Swizz. In May 2010, Swizz confirmed the news that he was engaged to Alicia. Alicia Keys was also pregnant with their first child. On July 31, 2010, finally, Alicia and Swizz tied the knot on the French island of Corsica.

Are you wondering, “is Alicia Keys pregnant?” The answer is no, it’s just another rumor! Alicia welcomed their first child, a son, Egypt Daoud on October 14, 2010. On December 27, 2014, the pair celebrated the birth of their second son, Genesis Ali Dean. Alicia Keys’ family is a picture perfect one, as it is evident from the star’s updates and pictures on her Instagram account. Check them out, they are family perfection!

Everybody knows how amazing Alicia Keys’ songs are. She has even won many major awards due to her singing capabilities. Moreover, she even got the chance to collaborate and work with other talented artists such as Jay-Z, Usher, Kanye West, and even Stevie Wonder! Her singing career started in the year 1994, when she was introduced to Peter Edge, who was extremely impressed after meeting Alicia for the first time. He said, “I had never met a young R&B artist with that level of musicianship. So many people were just singing on top of loops and tracks, but she had the ability, not only to be part of hip-hop, but also to go way beyond that.”

After that, there was no looking back and she signed her first contract with music label, Columbia Records. From there on, there was no stopping her musical career. She went on to deliver hit after hit, as her soulful voice and insane piano ability made little Miss Keys a household name.

Alicia’s albums include, Songs in A minor, The Diary of Alicia Keys, Unplugged, As I Am, The Element of Freedom, and Girl on Fire. With many albums, awards and an incredible music career under her belt, Alicia will now be adding “vocalist judge” to her resume! On March 25, 2016, it was announced that Alicia will be joining Miley Cyrus as a new judge on The Voice season 11.

Apart from her thriving music career, she earns even more money by going on different tours and promoting various brand products like, Blackberry, Reebok, and Levi’s. She is also involved in a lot of charity work and is the global ambassador of the non-profit organization, Keep A Child Alive.

Alicia and her family live in a beautiful penthouse with a spacious area of 6,167 sq ft, and a cost of $12.75 million. Yikes! The penthouse comprises of 5 large bedrooms, a private spa, floating glass stairs, a Jacuzzi, a gym, pool tables, a recording studio, her own parking lot, and even a ballroom! Alicia is also very fond of cars; her collection includes a gorgeous Lotus Evora GTE, which is worth $150,000.

Alicia’s net worth seems to be increasing every year, we just hope she keeps on making amazing music for her fans! If you want to learn more information about the beautiful and talented singer, then feel free to click here.