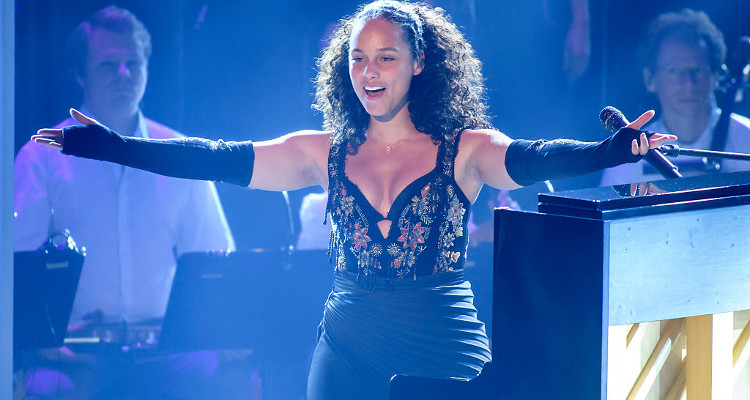 Alicia Keys returned to The Voice season 12 to mentor aspiring musicians. While Team Alicia is looking good so far, let’s take a closer look at the iconic singer who’s coaching them.

Team Alicia is going for a win this season! Alicia Keys has returned for her second stint on The Voice and she’s making sure she’s got the cream of the crop. The Queen of R&B has more awards than we can count, including 15 Grammy Awards and millions of album sales worldwide. She has barely skipped a beat in her entire career. No wonder so many contestants are excited to be on Team Alicia! Find out more about this amazingly talented musician, including details about her net worth, husband, and sons in our Alicia Keys wiki.

#1. She was One of the Top-Earning Women in Music

In 2011, Keys was among the top-earning women in music by Forbes, thanks to her super-popular single, “Empire State of Mind.” The list was later dominated by Lady Gaga and Taylor Swift, but Keys remains one of the biggest-selling female artists today. After selling over 35 million albums and 30 million singles worldwide, she has accumulated a net worth of $130.0 million in her entire career. That’s a lot more than her husband, Swiss Beatz’ net worth of $65.0 million!

Ever since Keys belted out the notes for her debut single, “Fallin,” she showed the potential of becoming a superstar. Her first full-length album, Songs in A Minor in 2001, which debuted at #1 on the Billboard Hot 200, established herself as an R&B artist to look out for. The album won Keys her first five Grammy Awards that year, including the award for Song of the Year for “Fallin.’” Since then, Keys has released six studio albums in her career.

She was born Alicia Augello Cook in Manhattan to Terria Joseph, a paralegal and part-time actress, and Craig Cook, a flight attendant. Her father is African-American and her mother is of Irish, Scottish, and Italian descent. Keys has always been comfortable with her mixed heritage saying, “My mixed-race background made me a broad person, able to relate to different cultures.” Her parents separated when she was two years old, and Keys was raised by her mother. She has two younger half-brothers, Clay Cook and Cole Cook.

Keys started in the entertainment world at the age of four, when she made an appearance with a group of girls on The Cosby Show. At the same time, her mother sent her to music and dance classes. She was trained in classical piano from the age of seven and played compositions by Beethoven, Chopin, and Mozart. A 12-year-old Keys enrolled in the Professional Performing Arts School, where she majored in choir and began writing songs. She was valedictorian of her graduating class at the age of 16.

Through her new manager, Jeff Robinson, Keys was introduced to a few record labels. She signed a record deal with Columbia Records and at the same time she was accepted into Columbia University. Keys couldn’t juggle her career and music, so she dropped out of university to pursue music full time. However, Keys’ career was stalled for two years because of executive changes in the label, resulting in the singer ending her contract after some dispute. She then joined Clive Davis and adopted the stage name “Keys” because she felt it conveyed who she was as a performer.

I will raise my children to be beautiful human beings and powerful men who understand how magnificent women are. I believe that all women, all over the world, are beautiful, whole and powerful. They should be honored like goddesses, not just on International Women’s Day, but every day. We must continue to lift each other up, believe in ourselves and not hold back from this truth. #InternationalWomensDay

#3. She is on Good Terms with Her Husband’s Ex

The 36-year-old was dating the rapper, Swiss Beatz a.k.a. Kasseem Dean, in 2008. At that time, he was still in the process of divorcing his then-wife, Mashonda Tifrere, another R&B artist. Tifrere appeared on VH1’s Love and Hip Hop, where she was expressive of how hurt she felt when Swiss moved with Keys so quickly after their separation.

Keys and Swiss got engaged in 2010, less than a month after his divorce from Tifrere was finalized. They were also expecting their first child together. While it was her first child, Dean had three other children from previous relationships, including a son from his marriage with Tifrere. Keys and Dean had their child blessed in a Zulu ceremony while in South Africa for the 2010 FIFA World Cup. They married that same year on the French island of Corsica and in October 2010, their son Egypt Daoud Dean was born. Their second child, Genesis Ali Dean, was born in December 2014.

Tifrere and Dean weren’t on amicable terms when she accused Keys of being a “homewrecker” in a series of tell-all interviews. But things changed a few years later when the couple mended fences to raise their children. In 2016, Keys released the song “Blended Family,” which was a lyrical love letter to her husband’s children and a tribute to Tifrere. The three even go on vacations together with their children!

While making great music, Alicia Keys is at the helm of philanthropic work and promoting female empowerment. She founded the “Keep a Child Alive” organization, which helps AIDS-affected families in Africa. She also raises funds during natural calamities and participated in the Washington Women’s March after President Donald Trump’s inauguration.

One of her most ground-breaking ventures towards empowering women is going makeup-free. If you are following The Voice, you will notice she looks even more beautiful without makeup. Keys has been hitting red carpets, competitions, and award shows completely bare-faced.

The singer explained her decision to go sans-makeup saying, “Women are brainwashed into feeling like we have to be skinny, or sexy, or desirable, or perfect. One of the many things I was tired of was the constant judgment of women,” she said on Lenny Letter, a feminist newsletter. “Every time I left the house, I would be worried if I didn’t put on makeup: What if someone wanted a picture?? What if they POSTED it??? These were the insecure, superficial, but honest thoughts I was thinking. And all of it, one way or another, was based too much on what other people thought of me,” Keys added.

The “Girl on Fire” songstress maintains her glowing complexion with a combination of diet and exercise. The artwork of her last album, Here was shot by photographer, Paola with Keys going completely bare-faced.