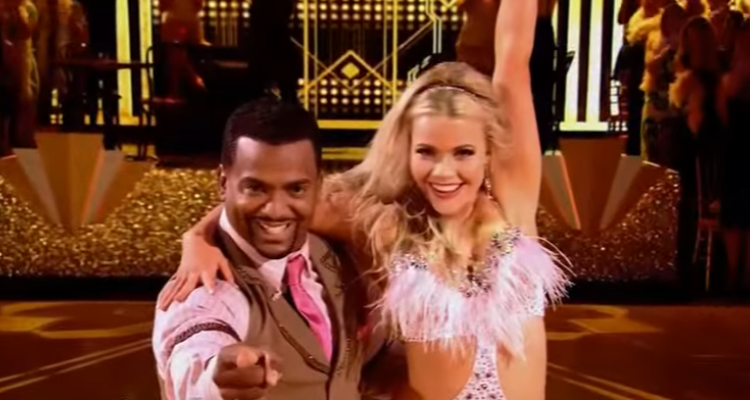 It’s Week 5 and Alfonso Ribeiro on Dancing with the Stars is just one of the many reasons to watch tonight’s episode! The stars and their professional dancers are still getting eliminated and it’s only a matter of time before another winner is chosen this season. If you want to know more about Dancing with the Stars Season 19 winner as he rejoins the pack tonight for a special appearance, then have a look at our Alfonso Ribeiro wiki!

Alfonso Lincoln Ribeiro Sr. (who’s height is 5’6’’) was born on September 21, 1971 in the Bronx to Trinidadian parents, Michael and Joy Ribeiro. Alfonso began his career at a very young age and after acting in a series of commercials and TV shows, he began to find more work in the ‘90s, where he became most known as the preppy, egocentric, awkwardly dancing cousin of the “Fresh Prince of Bel-Air.”

In the ‘90s, Ribeiro landed the role of Carlton Banks on the hit sitcom The Fresh Prince of Bel-Air, starring Will Smith. Ribeiro’s character was Will’s first cousin (their mothers were sisters) who was always getting involved in Will’s daily antics. Will lived with the extremely wealthy Banks family, after his mother sent him there to stay out of trouble and to get him out of their rough West Philadelphia neighborhood. Carlton wore preppy clothes, usually complete with a sweater and khakis, and his character provided much comic relief for the highly successful show. The role was considered the height of Ribeiro’s career and he’s still famous for “the Carlton dance,” a dance he used to perform on the show, and occasionally by request. His net worth is estimated at $7.0 million.

But Alfonso Ribeiro’s Dancing with the Stars days aren’t over, now that the Season 19 alum is back for tonight’s special “Disney Night” episode! There will be live musical performances and a dance choreographed by Mandy Moore (no, not that Mandy Moore). Check out his moves on the dance floor when he was a contestant on the show in 2009!

The Fresh Prince of Bel-Air star is currently married to writer Angela Unkrich, since 2013 and they reside in Los Angeles.

Alfonso was married previously to Robin Stapler in 2002, until they divorced in 2006. They share custody of their daughter Sienna. Angela Unkrich gave birth to son Alfonso Lincoln Jr. aka “AJ” in 2013 and their second son, Anders Reyn in 2015.

Aunt Viv ain’t havin’ it, and it looks like Janet Hubert isn’t in the mood to play Riberiro’s mother at the moment! A while back, when The Fresh Prince of Bel-Air cast had lunch in L.A., Hubert’s Aunt Viv wasn’t there! Maybe she didn’t get the text? It’s easy not to get the text when you weren’t even invited! But just like her character, Hubert’s clap back is still strong as ever, and she aimed it at Ribeiro.

“I know the media hoe [sic] Alphonso Ribeiro [sic] has posted his so called reunion photo. Folks keep telling me about it. He was always the ass wipe for Will. There will never be a true reunion of the Fresh Prince. I have no interest in seeing any of these people on that kind of level,” wrote Hubert on her Facebook page.

“I am not offended in the least, by this photo,” Hubert continued about the reunion shot. “It was an event for Karen’s charity. It does however prompt me to take some meetings in Hollywood to pitch my memoir PERFECTION IS NOT A SITCOM MOM, and tell of the behind the scenes story before I leave this earth.”

This isn’t the first time Hubert has had an issue with a member of her old Banks family. She also had a problem with Smith’s wife about boycotting the Oscars! She certainly has no problem voicing her opinions!

Also Read: “Dancing with the Stars” 2017 Cast: Here’s the Full List of Celebrities Ready to Dance Their Way to Your Heart

Check out Alfonso tonight as he returns to Dancing with the Stars for a guest appearance! Catch DWTS every Monday at 8:00 p.m. EST on ABC!