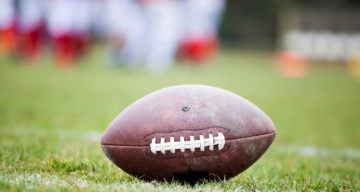 Vita Vea has gone through highs and lows during his NFL career, including injuries and a Super Bowl championship. Moreover, Vita Vea’s wife, Alexus Atchley, is making his Instagram followers swoon. The fellow athletes have been together for years and before his professional career. Atchley’s also been his constant cheerleader at games. They’ve made their relationship work through physical distance and tied the knot in 2022. Fans want to know more about Vita Vea’s newlywed wife’s background, which we reveal in this Alexus Atchley wiki.

Alexus Atchley was born on May 30, 1994, and hails from California. She is the daughter of Mitchell and Stacy Atchley and grew up alongside three siblings, Justin, Skye, and Paris.

They are not the only athletes in the family. Alexus’ cousin, Kaitlyn Clark, is a gymnast for the University of Alabama and Team USA. And her grandfather, Richard Gudmundson, played football at the University of Southern California.

Unfortunately, their mother, Stacy Atchley, passed away in 2020 after battling breast cancer. She is survived by her four children among extended family.

Alexus Atchley is a student-athlete like her siblings and played basketball at Yorba Linda High School. She was team captain twice and led her team to back-to-back championships.

After graduating in 2012, she initially attended the University of Colorado Boulder. She majored in communications and was part of the basketball team roster but didn’t see any playtime as a walk-on.

Atchley then transferred to the University of Washington. She played three seasons there before graduating in 2016.

Currently, Atchley is part of the faculty at the University of Arizona. She is a graduate student manager for the Wildcats women’s basketball program.

During her athletic career, she had the opportunity to meet Kobe Bryant. Atchley was among the many who mourned the basketball legend’s loss.

California-born Vita Vea played college football at the University of Washington. The Tampa Bay Buccaneers selected him in the 2018 NFL draft.

Alexus Atchley and Vita Vea have reportedly been together since they were students at the University of Washington and even after she transferred. She was with him when he was selected by the Bucs.

The couple announced their engagement in October 2020. That same year, the defensive tackle had a Super Bowl ring to match the ring he gave his new fiancée.

They married on March 3, 2022. That same day, Vea’s Huskies and Bucs teammate, Benning Potoa’e, also married his fiancée. However, the weddings took place in separate locations.