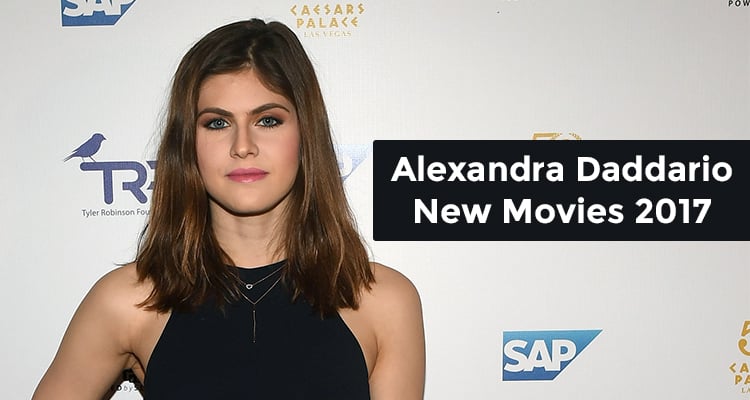 The Baywatch trailer has been released, and if you weren’t already in love with Alexandra Daddario, you probably are now! The 30-year-old actress has been in the industry for a while, but it seems she’s just turning heads now. She is famously known for her role as Annabeth Chase in the Percy Jackson series, and she has also starred alongside Dwayne Johnson in San Andreas. As the star is busy promoting her upcoming movies releasing in 2017, we thought it would be a good time to take a look at Alexandra Daddario’s new movies.

Baywatch is the remake of the ‘90s TV show known for those slow-mo lifeguard running scenes and The Hoff. But let’s be real, most people probably watched the show for the gorgeous women who were cast as the life-saving heroes! In this reboot of Baywatch, Daddario will don the classic red bathing suit and she will be the one running down the beach to save lives. She’s been cast as Summer Quinn, a lifeguard and the love interest of Matt (Zac Efron). Daddario is also reunited with her San Andreas co-star Dwayne Johnson in the film, as well. The plot revolves around a veteran lifeguard (Johnson) who has a problem with a reckless recruit (Efron). However, they put aside their differences to uncover a criminal plot that affects the beach. The film also stars Kelly Rohrbach, John Bass, Priyanka Chopra, David Hasselhoff and Pamela Anderson. Shooting for the movie took place in Miami, Savannah and Georgia. It is set to be released on May 26, 2017.

Also Read: Dwayne Johnson’s New Movies in 2017: The Rock Will Have a Busy Year

In this upcoming comedy, Daddario plays the role of Kate, who plans to go on a tropical vacation with her best friend, Meg (Kate Upton). Their plane is sent to St. Louis due to a hurricane warning and the two end up fighting for the same guy they both met on the flight. Who will get the guy, and at what cost? We will have to wait and see!

The Layover is directed by and stars William H. Macy, as well as Matt Barr, Robb Corddry, Kal Penn, Matt L. Jones, and Molly Shannon. Filming began in May 2015 and was wrapped up a month later. The release date of The Layover has not been disclosed, however, it has been reported that the movie will be out sometime in 2017.

When We First Met is a romantic comedy written by John Whittington and Adam DeVine. The plot centers around Noah (Adam DeVine) who gets the perfect opportunity to spend a night with Avery (Alexandra Daddario), the girl of his dreams. However, Avery puts him in the friend zone, and Noah spends the next three years trying to figure out what went wrong. He then gets an opportunity to travel back in time to change the course of that night. The movie stars Adam DeVine, Alexandra Daddario, and Robbie Amell. There is no official release date yet, but the film expected to be out in 2017.

Also Read: Scarlett Johansson’s New Movies for 2017: What’s Next for the “Avengers” Star?

#4. We Have Always Lived in the Castle

We Have Always Lived in the Castle is a mystery film written by Mark Kruger and directed by Stacie Passon. The film is loosely based on the 1962 novel of the same name written by Shirley Jackson, and stars Alexandra Daddario, Crispin Glover, Taissa Farmiga, and Sebastian Stan.

After the murder of several members of the Blackwood family, Merricat (Taissa Farmiga), Constance (Alexandra Daddario), and Uncle Julian (Crispin Glover) live away from the hostile townspeople in their New England Estate. All goes well until one day, their cousin Charles (Sebastian Stan) drops by the estate with the hopes of stealing the family fortune. Once again, no official date has been set for its release, but the film is slated for a 2017 date.