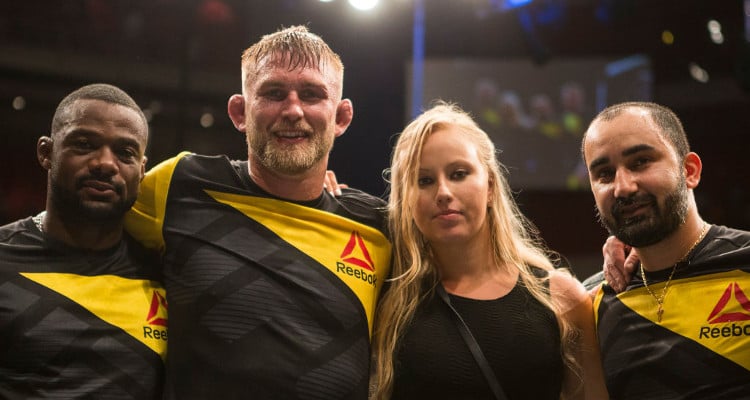 Alexander Gustafsson capped off a spectacular victory against Glover Teixeira on Sunday night (May 28). But what happened afterwards was even better! Gustafsson got down on one knee and proposed to his girlfriend, Moa Antonia Johansson in the octagon. So now, Alexander Gustaffson’s girlfriend is his soon-to-be wife! We’ve got all you need to know about her, right here.

Alexander “The Mauler” Gustafsson put on a spectacular show on his home turf last night, defeating Glover Teixeira in a one-sided fight. And just when the home crowd thought it was the end of Gustafsson’s spectacular show, he proposed to his beautiful girlfriend, right there in the octagon! Moa Antonia Johansson is now the MMA fighter’s fiancée. Here is everything you need to know about her in our Moa Antonia Johansson wiki.

#1. Who is Alexander Gustafsson’s Girlfriend?

Not much is known about the soon-to-be Mrs. Gustafsson (Mauler). She is a native of Sweden, just like the fighter himself, so it probably made his proposal in their home country all the more special! While Johansson is from Stockholm, Gustafsson grew up in Arboga, a small town south of Stockholm.

There’s still no information on her early life or what she does for a living, but she’s always seen  supporting her man during his fights. She was born in 1990, which makes her around 27 years old.

Also Read: Laura Kiessling: Everything You Need to Know about Cal Ripken’s Girlfriend

The 30-year-old light heavyweight fighter began dating his now-fiancée in 2015. Before Johansson, he was often seen with his then-girlfriend, Amanda Bianchi. She’s also from Sweden and moved to Stockholm to live with Gustafsson.

It’s not known when they began dating, but they were together for several years. The couple was living together and shared a love for dogs, owning three of them. They were reportedly engaged and she got along well with Gustafsson’s sister. She posted a photo of her engagement ring with a heart-shaped diamond on Instagram. But they broke up in 2015 and soon after, Gustafsson started dating Johansson.

#3. Gustafsson and Johansson Have a Daughter

Earlier this month, Gustafsson and Johansson welcomed their baby girl, Ava, who was born in Sweden. Little Ava is the star of her parents’ Instagram accounts. The top division contender shared the intimate picture of Ava’s birth on his Twitter and Instagram saying, “Welcome my princess Ava. Amazingly proud of mom Moa and her strength during the delivery. Happiest man alive.”

Gustafsson has over 426,000 followers on Instagram, and his fiancée has over 3,000 followers and growing. Given that they can’t get enough of their daughter and post often, Ava Gustafsson could well be on her way to becoming a social media celebrity!

Welcome my princess Ava. Amazingly proud of mom Moa and her strength during the delivery. Happiest man in the world. This is my family ❤️ ??

Sweden’s hero, Alexander Gustafsson, scored an epic knockout win over Glover Teixeira at UFC Fight Night 109 in Stockholm. He now has a shot at the title in the light heavyweight division. After dominating the fight against Teixeira, Gustafsson has to defeat Daniel Cormier, the reigning champ.

That aside, the new father has a wedding to plan. “I hit him with bombs and he took every shot, he’s a great fighter,” Gustafsson said about Teixeira after the fight and invited his girlfriend, Moa Antonia Johansson, into the octagon. He then got down on one knee amid the cheers of the home crowd and proposed to her.

While Daniel Cormier will defend his title in July’s UFC 214, Gustafsson has to defeat British fighter Jimi Manuwa for the next available shot at the 205-lb title. Perhaps wedding plans will be on the back-burner for now?

Now that's how to propose! Congrats to the future Mr and Mrs @AlexTheMauler ? pic.twitter.com/hCYpuYGD38