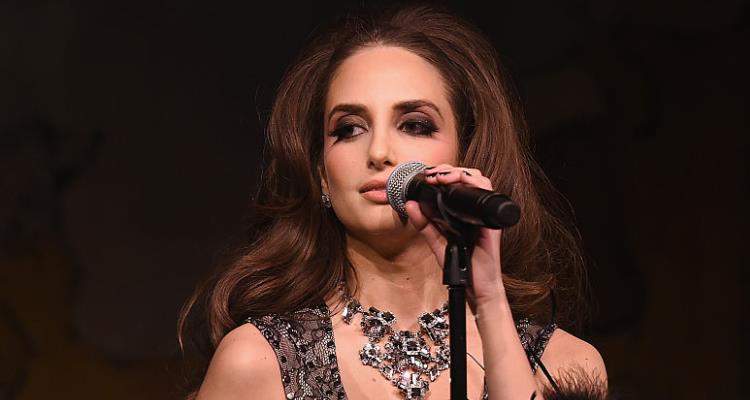 With Alexa Ray Joel engaged, her name is being highly buzzed about today and many are taking to the Internet to scope out her hottest looks. Just because she’s soon to be married, doesn’t mean she’s going to stop flaunting what her mama gave her! In fact, we’ve found some of Alexa Ray Joel’s hot pics to prove that engaged or not, she is owning how beautiful she really is. Check out the pics below!

The new year bought Alexa Ray Joel one of the best moments of her life. When her restaurateur boyfriend, Ryan Gleason proposed to her, she was completely taken offguard. But with some dreamy lines and a huge rock, she couldn’t say no! She also couldn’t stop herself from sharing the good news with her friends and fans, the world over.

The daughter of Christie Brinkley and Billy Joel, Alexa describes herself on the Instagram account as a “singer/songwriter/theatric and a sentimentalist & romantic nyctophile.” The many up-close shots of herself on her account are undoubtedly giving girls everywhere “skin envy,” as she appears to have the skin of a porcelain doll! In fact, she doesn’t even look her age of 32. Other posts include her sharing her acting skills, her adoring fiancé, model shots, and even a couple videos of her showcasing her beautiful singing voice!

But this is not all, when she is not very busy penning lyrics, modeling, or singing songs, Alexa Ray Joel supports worthy causes and isn’t afraid to let her political side emerge! She’s got smarts to go along with all those official Alexa Ray Joel sexy pics and we’ve found a couple for you right here. From Alexa Ray Joel’s bikini pics to shots of the ins and outs of her lavish life, we’ve got you covered below!

Standing Up for What’s Right—& Looking Great Doing It!

~Every woman is sacred and precious in her own right.?We all have something distinct to bring to the table. Don't ever let ANYONE tell you otherwise, for their attempts to undermine your worth are merely displaced projections of their own insecurity. In a perverse way, I'm actually glad I have been bullied- because it has only made me more hyper-conscious of how impactful WORDS really are… and, in turn, to use them very carefully. We are living in a largely desensitized culture as a result of social-media, but that doesn't mean that every single one of us shouldn't do our small part to encourage a more empathetic and DECENT dialogue. I know that feminism is currently a somewhat controversial and overly politicized term, and not everyone grasps why it is still relevant and needed right now; but as someone who is chronically observing the sociological trends (I'm always fastidiously reading blogs, comments, articles, etc.)- I can tell you for a fact that women are shamed on a more regular basis than men. Do people give my Father a hard time for how many times he's been divorced? Nope. Do they give my Mother a hard time for it? Constantly. I'm not trying to 'gender-bait', but there's certainly a double standard out there- whether some people want to admit to it or not. I don't by any means consider myself a 'celebrity', but as a female public-figure [if you will], I can tell you in all honestly that I've been periodically shamed for any given thing, and often times the shaming is a quizzical paradox: whether that be my last name, my coming from 'privilege', my old nose- which was apparently 'too big' for societal standards and gave me a 'bow-wow face', then shamed for getting one rhinoplasty-surgery in my twenties, being 'too pale', using 'too many big words', being 'too confident' and 'desperate for fame', being called out as 'overweight or not toned', and then other times being called 'grossly-skinny', being called out for 'fake boobs' (which is just an outright lie)… and so it continues. People will always find something to pick on when you're a woman. We have GOT to stop this! Society deserves better. Humanity deserves better. Women deserve better.~

~Be gentle with yourself. ?Cultivate and celebrate the skin you're in; don't compete, don't compare. You're precious and sacred, whether covered or bare.~?

~I daresay, I'll fancy trading my sea-legs for a purple fishtail… please and thank you kindly, Sir Poseidon.~✌?????

A Glare That Lures…

~Learn to love your crooked teeth; You're more than your self-doubt belies / Learn to love all that's brewing beneath; The cracks of your ins and outsides.~ ?Musing By Me ? Capture By Shades

All in the Family!

~Alas… the family that stays together, poses together. And lifts The Mamacita up so she can walk on water, of course.~ ?✨

Adorably speechless over her hubby’s proposal!

…So I was completely taken off-guard, dumbstruck, and shell-shocked- and FOR ONCE in my life, I had absolutely no words, and I couldn’t speak… I just kept staring at this ridiculously exquisite ring- and he was just hysterically laughing at me!!! ???