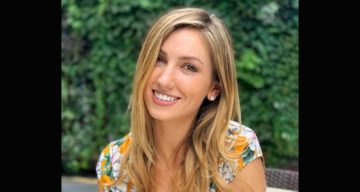 Alex Hogan has been the newest face on Fox News since 2020 began. The Swiss-born journalist has lived in four countries, including the U.S. in seven states. She’s won awards since she was a student, and experienced a rapid rise in her career that brought her to the Fox News Channel. Hogan is now a correspondent who has reported from the ground of various nationally significant events in 2020. If you’re one of the many curious about this young reporter, this Alex Hogan wiki has all the information you need.

Alexandra Hogan was born to Jim and Stacie Hogan in Switzerland. Alex and her family celebrate her birthday on December 16.

Alex grew up alongside her brothers, Nick and Chris, in Switzerland. She has also lived in Israel and Spain for work. She’s also bilingual, fluent in English and French.

Hogan studied broadcast journalism at Penn State University from 2012 to 2016. While still in college, she got her initial broadcast experience working at the ESPY Awards in 2013.

She frequently produced and reported on the Penn State THON, the philanthropic drive on campus. She was also a radio news reporter and her sorority’s IT manager. Hogan won a regional Emmy Award for her work at the school’s Donald P. Bellisario College of Communications.

Hogan wrote weekly articles for a food blog while balancing internships. She interned at NBC News in 2014 and at Bloomberg in 2015.

Hogan started her professional career as an anchor and reporter at Center County Report in 2016. That same year, she moved to WTAJ-TV in Altoona. She was a general assignment reporter at another station in Reading until 2019.

In January 2020, Alex Hogan started as a correspondent at Fox News, her first national network and where she is today.