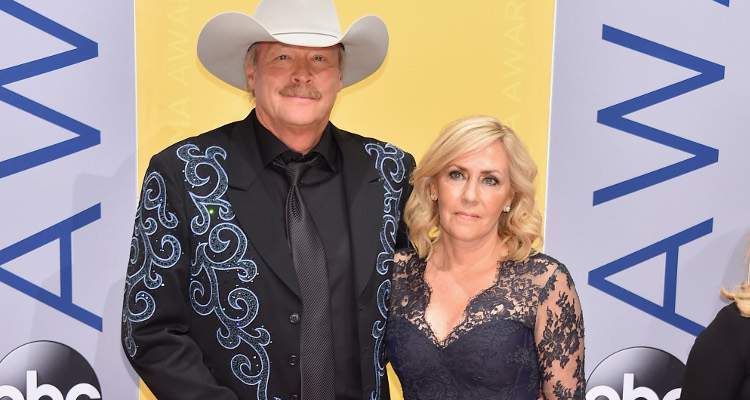 Alan Jackson closed off the 2017 CMA Awards in a spectacular way. And it was just what you’d expect from the newest inductee of the Country Music Hall of Fame! Alan Jackson’s wife and kids joined him to celebrate his latest achievements. Read all about her here!

The 2017 CMA Awards paid tribute to country legend, Alan Jackson. The hitmaker took the stage to close out the awards night in a grand way. Last month, he was inducted in the Country Music Hall of Fame. Alan Jackson’s wife and kids were there to celebrate this landmark achievement in his career. Alan Jackson and Denise Jackson’s marriage had its ups and downs, but she stuck with him through thick and thin. Find out more about Denise Jackson, right here.

Behind Her Man’s Success

Almost four decades ago, a young Alan Jackson married his high school sweetheart, Denise (née Jackson —how cool is that!?) in December, 1979. Six years after their hometown wedding, Alan and Denise Jackson moved from Georgia to Nashville, where he hoped to build a career in country music.

Though he worked in the former Nashville Network’s mailroom, it was Denise who gave her husband’s career a jumpstart. While working as a flight attendant, she met the Rhinestone Cowboy himself, the late Glen Campbell, at an Atlanta airport.

She told Campbell about her husband and his musical talents. Intrigued, the iconic musician became a mentor to the young Alan and gave him a $100-a-week writing gig. Campbell eventually helped the budding singer score his first record deal with Arista Records. In the years to come, Alan Jackson would succeed Campbell as a legend.

I think a lot of people may not realize what a huge international star @glencampbellofficial was during his time in both pop and country music.  He had many timeless hits that will never be touched.  He also was a great musician and great singer who played on a lot of music before he became THE Glen Campbell.  I will always feel like I owe Glen a lot of gratitude – he was my first contact in Nashville when my wife, Denise, was a flight attendant. She met him at the airport and he gave her his business card for his publishing company.  This connection lead me down the path that brought me to where I am today. RIP #RhinestoneCowboy Alan and Denise Jackson

Although Alan and Denise Jackson’s romance started out great, their marriage was bumpy. His burgeoning music career kept him away from his family. “We were just kids when we started out,” said Alan, “We didn’t ever have the chance to fall in love as adults and to learn who you are before making a commitment. I think we lost some of that original feeling. I did anyway.”

Losing that original feeling led him down the path of infidelity after 19 years of marriage. When Denise found about his affair, their marriage fell apart. In 1998, the couple briefly separated. It was reported that Alan moved out of their Franklin home, but there was no news of a divorce.

After four months apart and couples therapy, Denise was able to forgive him. “I really had no choice,” she said. “If I wanted to have my marriage to be restored, I had to forgive. I had to draw my strength from God.”

They reconciled and renewed their vows on their anniversary in 1998. In 2007, Denise got candid about their separation and marital struggles in the tell-all book, It’s All about Him, which topped The New York Times bestseller list.

In 2010, Denise and Alan received the news no family wants to hear; Denise was diagnosed with colorectal cancer. In various interviews, Alan confessed how hard it was to see her battle cancer and being unable to help her.

Her diagnosis changed the way she looked at things. “When you go along with your life and you think, Oh everything is great. I’m in control, and then you come against something that you have absolutely no control over, you have to look for God’s hand in it.” After months of chemotherapy and prayer, Denise was cancer-free.

Who Runs the World?

Their relationship inspired several of Alan’s songs, including “She Likes it Too.” Denise and the girls also appeared in his music video for “Remember When,” which was based on the fond memories he shares with his wife.

In 2013, then 20-year-old Alexandra Jackson ran into trouble with the law. She was arrested on charges of assault, underage consumption of alcohol, and resisting arrest during a traffic stop. In 2012, his eldest daughter, Mattie was also arrested for driving under the influence.

Despite going through their fair share of struggles, the Jacksons are one tight brood. Denise and their daughters always support Alan’s career. Meanwhile, Alan is your typical dad who gave his girls “the talk.”

“I told my daughters I was a nice boy. I was a good kid, and I know what I was trying to do when I went out on a date,” Jackson said. “I don’t care how nice they are! Boys are boys.”