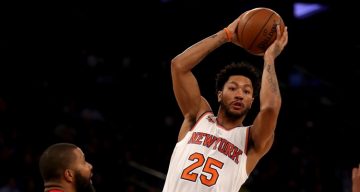 With the Golden State Warriors winning against the Cleveland Cavaliers in the NBA final, fans are already looking at players who may end being free agents or looking to be traded. One of those conversations has involved New York Knicks player, Derrick Rose. Talks of the trade have made fans curious about the 28-year-old and his love life. Derrick Rose’s girlfriend, Alaina Anderson, is also being looked at as a result. Now, there are people looking back at Alaina Anderson’s racist tweets and her private life. If you want to know more about Derrick Rose’s girlfriend, then keep reading!

Who is Alaina Anderson?

Alaina Anderson’s age is 23 and she has been with her basketball boyfriend since last year. We know people have been curious about Alaina Anderson’s ethnicity, but she hasn’t commented on that at this time. What we do know is that she’s never too far from Rose and she’s always there for him, both on and off the court.

If you are looking for Alaina Anderson’s hot pics or you’re just looking to learn more about her, then look no further than her personal Instagram account! She has 111k followers and she posts photos of herself working out (some of her workings could make you sweat just looking at them), spending time with Rose, or just taking multiple selfies, of course!

Is She Derrick Rose’s Baby Mama?

Does she have a baby with Rose? So far, the couple isn’t expecting anytime soon, but Anderson does have a baby: A dog named Louie! According to Louie’s Instagram (yes, dogs can have those, too), he was born on March 18, 2017 and he’s a miniature dapple dachshund. He also has 720k followers! How does a dog even get so many followers? That’s more followers than the average person gets!

Although Anderson may not have meant to be offensive with her 2011 Twitter comments, those who were offended didn’t care. In her tweet, she called out black women for being mad that Rose had a white girlfriend at the time and later said, “Black people and white people have some nice looking kids together!” She also said she wanted to be “hood again,” but the comment was later deleted. It’s possible Rose didn’t know or didn’t care, but those who left comments didn’t forget.

Is Derrick Rose Being Traded?

Is it possible that the New York Knicks star could be leaving the Big Apple? Well, anything is possible in basketball and Rose will be a free agent for the first time in his career! The 28-year-old is coming off a meniscus tear in his left knee that required surgery by the end of the season. It’s possible that the Minnesota Timberwolves could be looking to add Rose to the pack. Only time will tell where Rose will land next, but we are sure Anderson won’t be far behind.