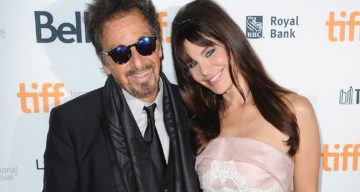 TORONTO, ON - SEPTEMBER 04: Actor Al Pacino and Lucila Sola arrive at "The Humbling" Premiere during the 2014 Toronto International Film Festival at The Elgin on September 4, 2014 in Toronto, Canada. (Photo by Angela Weiss/WireImage)

American acting legend Al Pacino is famous for playing mobsters, including Michael Corleone in The Godfather trilogy and Tony Montana in Scarface. In 1992, he won an Academy Award for Best Actor for his performance as Frank Slade in Scent of a Woman.

Although he never married, Pacino has been linked with a number of Hollywood starlets, including Beverly D’Angelo, Diane Keaton, Tuesday Weld, Jill Clayburgh, Marthe Keller, Kathleen Quinlan, and Lyndall Hobbs.

Since 2010, Pacino has been dating Argentinean actress Lucila Sola.  Initially, Lucila, who is 39 years younger, said she didn’t want to complicate her life, but the magnetism between the two of them was just too much.

When the press asked Pacino where he sees the relationship going, he answered that he is addicted to her love and she is everything he ever wanted in a woman!