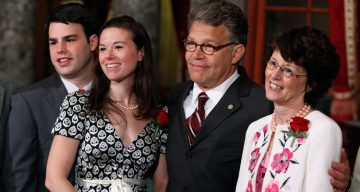 The Harvey Weinstein scandal opened a can full of worms in Hollywood. More and more women are coming forward to speak about sexual misconduct by some of the most powerful men in America. Al Franken’s sexual assault case is the latest scandal to have hit the public. Franken has issued an apology, but now his personal life is under intense scrutiny. So, is Al Franken married? Keep reading to know all about Al Franken’s wife in our Franni Bryson wiki.

Al Franken, who gained fame performing on Saturday Night Live, made the smooth transition from being a comedian to his position as a Minnesota senator. Now, as sexual harassment charges are leveled against him by radio host Leeann Tweeden, Al Franken joins an infamous and fast-growing list of influential men who have abused their position of authority.

After the sexual harassment accusations, many want to know if Al Franken is married. Al Franken’s wife, Franni Bryson, has often been spotted at his pollical campaigns and Franken has even credited her for his Senate win.

Learn all about the lady who has been married to Franken for over four decades.

Bryson was born on October 8, 1951, and was raised in Portland, Maine, but now lives in Minneapolis, Minnesota. Franni Bryson’s age is 66. Bryson grew up in a big family with four siblings.

According to Al Franken’s website, Bryson had a hard childhood. Tragedy struck the family when Bryson’s father, a World War II veteran, was killed in a car accident when Bryson was a young child.

After her father’s death, the family depended on her mother’s grocery store job and Social Security benefits to make ends meet. Bryson remembers how difficult it was surviving in the harsh Maine winters, but the family still managed.

With the help of scholarships, Bryson and her siblings were able to pursue a college education. Bryson went on to pursue a degree at the Harvard University.

Her Marriage to Al Franken

Bryson met Franken (who was a freshman at the time) at a party when they were both studying at Harvard. The two immediately hit it off after Franken bought Bryson a ginger ale and asked her out after a dance. Bryson described meeting Franken as “love at first sight.”

Bryson and Franken married in October 1975. Franni Bryson and Al Franken’s kids are named Thomasin and Joe. The couple celebrated their 42nd wedding anniversary last month, and Franken posted about it on Facebook while sharing an old picture of the two of them.

Franni and I just celebrated our 42nd wedding anniversary. We’ve been together since 1969. I met her at a college mixer…

Bryson starred as herself in a 2006 documentary about Al Franken’s life called Al Franken: God Spoke.

Although Bryson may not be active on social media, Al Franken has shared a few of Franni Bryson’s pics on his Instagram account. Most of Bryson’s pictures are of her on the campaign trail or in victory speeches with Franken.

From my family to yours, have a happy and healthy holiday.

I just voted — have you? Polls are open until 8 in Minnesota! -Al

Life in the Public Eye

During Franken’s 2008 Senate bid, Bryson spoke about her struggle with alcoholism in a campaign ad.

Bryson said, “How could a mother of two fabulous, healthy children be an alcoholic? When I was struggling with my recovery, Al stood right by my side, and he stood up for me. The Al Franken I know stood by me through thick and thin. So, I know he’ll always come through for Minnesotans.”

Franken said that this ad was the reason he won Senate.

Al Franken has always given credit to Bryson for his political career. Minnesota citizens may remember the emotional tribute Franken gave to his wife after his victory in the 2008 Senate race.

An excerpt from his speech reads, “This was a historically close race, but it wouldn’t have been if it wasn’t for Franni. I would have lost by kind of a lot. Now those of you who have spent time around the campaign know just how hard Franni worked and just how many voters gave me a second chance after meeting her. …As we waited to celebrate this victory, Franni has been a rock and an inspiration to so many who know us.”

With the sexual harassment accusations against her husband, Franni Bryson is back in the spotlight. However, Al Franken did not mention his wife in the official apology statement issued yesterday.