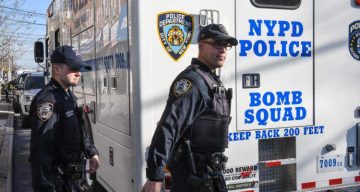 Akayed Ullah is NYC’s suspect for setting off a bomb in the underground subway system between Times Square and the Port Authority Bus Terminal during Monday’s rush hour. Many are asking about Akayed Ullah’s ethnicity and why he could be the man responsible. For more information, have a look at our Akayed Ullah wiki.

Where is Akayed Ullah From?

It is reported that Akayed Ullah’s age is 27. Akayed Ullah, a Bangladesh native, lived in Brooklyn. Information has yet to be released on Akayed Ullah’s family or his motives for the attack. As of right now, Akayed Ullah’s pics are circulating online as he has been identified in the arrest.

What Happened in NYC?

According to law enforcement officials, “The explosion occurred just before 7:30 a.m. near 42nd St. and between Seventh and Eighth Avenues. The explosion triggered a massive emergency response by police and fire both above and below ground, tangling subway and bus service at the nearby Port Authority bus terminal.”

Three victims were injured following the attack and Ullah was arrested by New York City Police with a pipe bomb strapped to his body. He has been described to be a “lone wolf” in his attempt and, although he has no confirmed terrorist group affiliations as of right now, his actions have been described as a terrorist attack.

One witness, Francisco Ramirez, told CNN that they heard more than one explosion at the time.

“From what I saw it sounded like it came from the subway, but I’m just guessing. It was two distinct explosions seconds from each other. As I was making my way toward the outside, I kept getting shoved by cops and there were cops at every entrance blocking and there was police and SWAT everywhere. It was scary. It was just a lot of chaos but I didn’t see any injuries.”

It’s not clear if Ullah had any connections to ISIS but his alleged actions are still considered an act of terror against New York City and the country. According to New York Times correspondent Rukmini Callimachi, “After every attack where the casualties are few, I see misinformed people labeling it a ‘failed terror attack’ and theorizing ISIS won’t claim it because it was botched. Let’s be clear: This man walked into Times Square wearing a bomb. That is not a fail in ISIS’ eyes … All you need to do to understand what ISIS claims is look at their history. They claim anything that propagates terror / fear, regardless of whether most would label it as ‘failed.’ The key dynamic here is not the notion of failure. Again for ISIS, a man slipping into 1 of the most guarded areas of the world wearing a bomb is a success. Rather, the issue is that the bomber is in custody. And generally, ISIS doesn’t claim when their man is in handcuffs.”

This attack comes on the heels of a separate incident earlier this year, involving 29-year-old Sayfullo Saipov, who was shot by a police officer after his truck hit a school bus and killed eight people on a bike path near the World Trade Center.