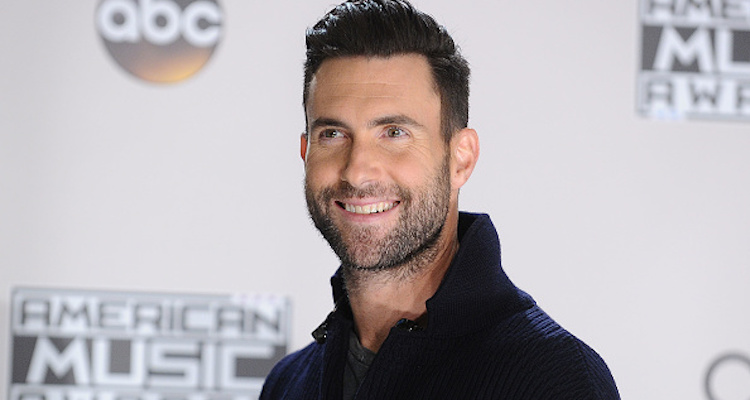 Wondering what Maroon 5 frontman, Adam Levine is up to these days? Well, luckily for you, we have just what you need! Whether it’s Adam Levine’s net worth or his latest headline-making move, we have the details here with our very own Adam Levine wiki.

It seems like just yesterday that we first heard the Maroon 5 star on the radio, giving us the kind of music that never gets old. From “This Love” to “Sugar,” the 37-year-old hit maker can do no wrong and continues to inspire as a judge on the hit music show, The Voice.

Adam Noah Levine was born on in Los Angeles, on March 18, 1979 to Fred Levine (the founder of the retail chain, M. Frederic) and Patsy (née Noah) Levine, an admissions counselor. His father’s side of the family is Jewish and is mother’s side is Protestant of German and Scottish descent. Levine is spiritual, but not religious and decided not to have a Bar Mitzvah because he didn’t agree with the idea of cashing in on the Jewish faith. His parents divorced when he was seven and he split his time between them during the week. He also has an openly gay brother and is a supporter of the LGBTQ community.

What started out as the garage band, Kara’s Flower’s eventually turned into the successful pop-rock band, Maroon 5. Levine always wanted to share his talent with an audience and he’s done just that. The “Moves Like Jagger” singer has been in the business for over 20 years and has earned a net worth of $60.0 million.

Levine is now one of the hosts of the hit show, The Voice, where he gets to mentor and train aspiring artists. Just recently, Levine made a contestant cry tears of joy during a blind audition. Blind auditions can usually be emotional, bringing both judges and contestants to tears with contestants opening up about their tragic and inspiring stories. In the latest episode, it was Malik Davage’s turn to tell the world his story and reveal what brought him onto the show. Davage, who is a Washington, D.C. native, opened up about the rough neighborhood he grew up in and his difficult childhood growing up without his dad. Davage’s father has been in jail for two years and he was raised by a single mother.

He also talked about his daughter and how the blind audition was the first time she would see him on TV. As he sang a soulful cover of Miguel’s “Sure Thing,” he struggled for a bit to hit the higher notes and fought back tears. Sure enough, Levine turned his chair around and brought Davage onto Team Adam! Fellow judge, Gwen Stefani hugged the 23-year-old as the crowd cheered and Levine offered Davage to sit in his red chair.

Also Read: Adam Levine Gushes Over His Walk of Fame Star in His Latest Post!

“I’m just a young guy from Washington, D.C., who’s trying to do best for my daughter,” he said through his tears as Levine invited his family out on stage.

As Davage took the stage with his mom and child, Levine took the time to offer his honest opinion and a few words of wisdom to help his newest team member.

“When you sang in your upper register, I’m gonna be honest with you about it, you need some work,” Levine said. “But when you do the work, that I think you can do really easily because you clearly have raw talent, there’s no telling where you can go with this.”

“I’m happy I took the risk and turned around, because you’re clearly a good dude,” Lavine added.

Levine’s daughter, Dusty Rose, was born on September 21, 2016 in Los Angeles. She made her public debut when Levine received his star on the Hollywood Walk of Fame for all of his achievements in music.

When the “Cold” singer received his star, he took the time to thank his daughter and share how much he loved his family.

“I have a daughter, I have the most beautiful wife in the entire world,” he said in a speech. “I am one of the luckiest people who’s ever lived and it has nothing to do with me. It has to do with the people who love me the most and so, I thank all of those people. I can’t do it individually, but I thank you all.”