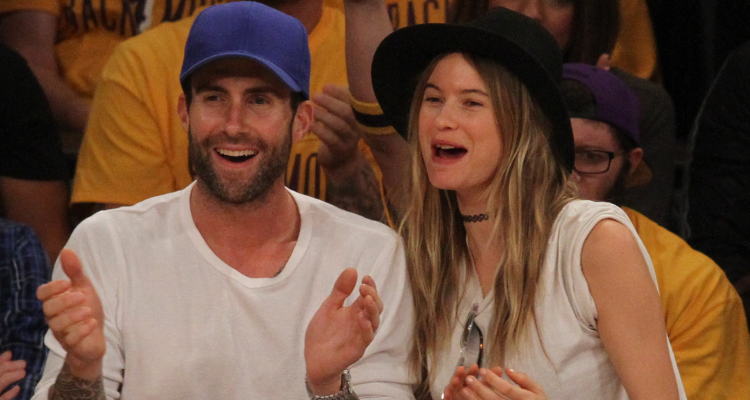 Here are five facts to know about the good-looking couple:

#1 They Have Been Married For 2 Years

Initially, Levine and Prinsloo began dating in May 2012, but broke up a year later in March 2013. They later reconciled and decided to get hitched. Levine proposed to the Namibian model, and the two became engaged in July 2013. The happy couple wed in a fairly traditional ceremony in Cabo San Lucas, Mexico and announced that they were expecting their first child in March 2016. Levine has previously dated Sports Illustrated swimsuit model, Anne Vyalitsyna, while Prinsloo dated model Jamie Strachan from 2005 to 2012.

#2 They Are Expecting Their First Child In September

Levine and Prinsloo are about to become new parents and experience the joys of parenthood come September. In an interview, Levine announced, “I want to have 100 kids. I want to have more kids than would be socially responsible. I don’t know when we’re going to do it. We can’t do it right now. I think it’s absolutely in the works for some future date.” Levine is currently a judge on season 10 of the reality singing show The Voice.

Happy birthday to the love of my life! Everything is boring and meaningless without you!!! ???? #besthusband ????????

Both Levine and Prinsloo are active on Instagram, giving their countless fans a sneak peek into their fabulous lives. The adorable couple consistently posts photos of all their fun activities and exotic holidays as they goof off, be it at Coachella, basketball matches or even some private time at home.

#4 They Have Matching Tattoos

Levine and her husband have a habit of getting matching tattoos together. In an interview, Behati explained, “It’s a weird thing to describe to others…but it’s one of the things that connect us and that we share.” While the two understandably don’t get to spend too much time together thanks to their packed schedules, they try to make sure to put in some good old quality time. In an interview, they described their relationship as simple with Behati revealing that “I had been traveling like a crazy woman, and we hadn’t seen one another, and he just let me sleep in. So sweet and easy.” Awww!

#5 They are Already Working Towards Their Child’s Future

It has been reported that Adam Levine performed at a Russian billionaire’s wedding in June. Sargis Karapetyan, 23 and his bride Salome Kintsurashvili spared no expense at their wedding, which allegedly cost them a staggering $2.6 million. The amount alone hints at the fat paycheck Levine, and his Maroon 5 bandmates would have walked away with. It seems like Levine’s trying to bring home some bacon to prepare for his child’s future. What better place to start than a Russian billionaire’s star-studded wedding? In an earlier interview, Prinsloo stated that “I have no expectations. Not in a bad way, but I’ve learned that you can’t plan ahead. I live day by day and see what happens. It’s vague, but I like it that way.”