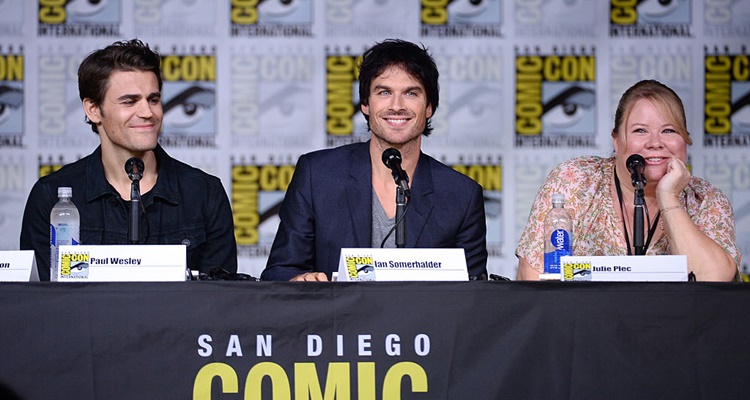 The titles of the first three episodes have already been announced. They are, “Hello Brother,” “Today Will Be Different,” and “You Decided That I Was Worth Saving.” Now that we know a little bit about the upcoming final season, come let us take a look at cast of The Vampire Diaries.

Many actors and actresses from the previous seasons are coming back for season eight. But the burning question we know you’re all wondering is whether or not we will actually see the return of Elena Gilbert! Producers of the show have hinted that she will definitely have a “strong presence” this season, but have not confirmed whether or not she will actually be returning to the show. You can, however, expect to see some new faces this season. Given below is the list of actors and actresses set to appear on The Vampire Diaries:

He plays the role of vampire heartthrob, Damon Salvatore. Somerhalder been one of the main characters of the show since day one, and continues to swoon the ladies with his charm and bad boy persona. He was originally turned into a vampire by Katherine Pierce, his former love. Damon’s character is playful, witty, and charming but with the flip of a switch, he can be the most cruel, evil monster you could ever imagine. Apart from TVD, Somerhalder has been a part of various other TV shows such as Smallville, Tell Me You Love Me and Lost.

Paul plays the role of Damon’s brother, Stefan Salvatore, and like his brother, he was also turned into a vampire at the age of seventeen by Katherine Pierce. He is one of the main cast members of the show, who has been caught in the lengthy love triangle with his brother Damon, and the woman they’ve both loved for years, Elena. Apart from this series, Wesley has been seen on of several other shows, including Wolf Lake, American Dreams, Everwood, Army Wives, 24 and The Originals.

King portrays the role of Caroline Forbes, who is Elena Gilbert (Nina Dobrev) and Bonnie Bennett’s (Kat Graham) best friend. Initially, she was not one of the main cast members of the show, but from season seven onward, she became one of the leads. Her character was so lovable, it was hard not to give her a leading role! Besides being an actor, Candice is also a singer.

Several other main cast members of The Vampire Diaries season 8 are Bonnie Bennett (Kat Graham), Matt Donovan (Zach Roerig), Alaric Saltzman (Matt Davis) and Lorenzo “Enzo” St. John (Michael Malarkey). Elena Gilbert is played by Nina Dobrev, however, Elena decided to quit the show in season six, but producers of the show have hinted that viewers may get to see her in season eight of The Vampire Diaries one last time!

Now that you know the cast of your favorite series, don’t forget to watch the premiere episode of season eight, tonight at 8:00 p.m. EST on the CW. In the meantime, take a look at the season 8 promo of The Vampire Diaries!

News
Deanna Bettineschi Leaving WAVY-TV: Where Is She Going?