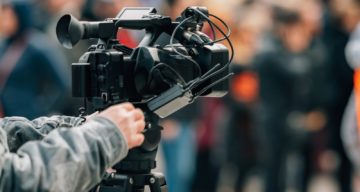 Stacey Baca announced she is leaving ABC 7 Chicago after 20 years. Of course, Chicago residents who adore this news anchor want to know why she is leaving. Baca hopes to spend more time with her family, especially her other half. Stacey Baca’s husband, Todd Gilchrist, is pretty low-key and has next to no social media presence. He doesn’t appear on his journalist wife’s social pages often either. When he does, it is when Baca expresses how much she loves her beau. The small glimpses into their relationship has her followers swooning and craving to know more about who Todd Gilchrist is. So we reveal more about Baca’s husband’s background in this Todd Gilchrist wiki.

Todd Gilchrist was born on October 27, 1975. He grew up on an Arkansas farm run by his parents, Joan and Robert Gilchrist.

His mother passed away in 2016 in Missouri. She is survived by her husband and their sons Todd and Timothy, daughter Tracy, their respective spouses and children, and extended family.

Stacey Baca is passionate about covering military veteran stories about her husband’s former career. Todd Gilchrist had a distinguished career as a naval aviator and squadron commander for 22 years.


After leaving the United States Navy, Gilchrist pursued a career in financial planning. It stemmed from witnessing his parents overcome financial difficulties with hard work and living within their means, along with the core values instilled in him by the Navy.

Todd has a post-baccalaureate certificate in accounting from Northwestern University. He also completed the Certified Financial Planner (CFP)® Certification Professional Education Program through the College for Financial Planning (CFFP) and the CFP® Examination.

Stacey Baca and Todd Gilchrist were married on January 24, 1997. There’s no record of them having children together.

Baca’s media career began in 1991, and she has been with Chicago’s ABC 7 since 2002. She’s stepping back from broadcasting after three decades to spend more time with her husband and their family.

“My husband and I want to spend more time together, more time with our family and friends. We want to have Sunday brunch with our parents, watch our niece and nephew play sports on a Saturday morning, and travel while we’re healthy, God willing. More life, less work,” said Baca in her statement as she announced her decision on May 1.

While ABC 7 viewers are sad to see her go, they are happy for her and wish both Baca and Gilchrist well. We don’t have to say goodbye to Stacey Baca just yet. Her last day on air will be June 26.