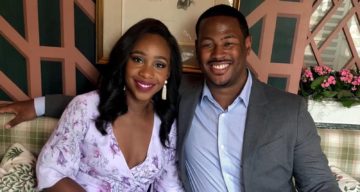 CNN White House correspondent Abby Phillip and her husband, Marcus Richardson, are going to be parents. Phillip’s personal life is rarely front and center. So, many of her devoted viewers are curious about her married life. Marcus Richardson, fortunately, gives us a lot of insight into their relationship, including their love for traveling. Richardson and Phillip’s globetrotting adventures are the best part of their respective Instagram accounts, and we can’t get enough of it. While their traveling is limited during the pandemic, we are excited to see the parents-to-be on their new journey. This Marcus Richardson wiki will have you following Phillip’s husband in no time for more glimpses into their marriage.

Marcus Glenn Richardson was born on March 9, 1983 to Col. Russell Richardson and his wife, Toussaint Richardson. He has at least one sister, Jasmine Richardson.

Marcus and Jasmine lived around the world thanks to their father’s job in the U.S. Air Force. Col. Richardson of North Carolina retired the director of logistics for the Third Air Forces in Europe at Ramstein Air Base in Germany and served in the Gulf War.

Thank you for keeping me in check, supporting me in my ups and downs, offering sage advice, but most importantly always making me laugh. Love you Dad. Happy Father’s Day!

The Richardson kids grew up in Okinawa, Japan. Marcus even studied at the Ramstein Air Base.

Marcus Richardson returned to the U.S. and attended Florida State University. He earned a bachelor’s degree in International Affairs and began a career in the digital security space.

Richardson has been based in Washington, D.C. for years. He first started as a desktop analyst at Howard University in 2009. After almost three years there, he joined LivingSocial as a technical support analyst.

Richardson has been with nVisium since 2014. He is currently a managing consultant at the app development company after working in security applications.

Abby Phillip met Marcus Richardson in 2011 at a mutual friend’s party in Washington’s Chinatown neighborhood. Neither knew many people there, so they struck up a conversation.

They connected over their shared interests until a random person interrupted them before they could exchange contacts. But as fate would have it, they would meet a month later when the same friends threw another party. They began dating a week after the second party.

After five years of dating, they moved into a new apartment in D.C. and hosted their families at Christmas. It was during the Christmas gathering that Richardson proposed to Phillip.

Two years after their engagement, Phillip and Richardson married on May 26, 2018. Their wedding took place in the historic Anderson House in Washington, D.C. Unexpected rain showers caused the ceremony to move to the house’s Cannon Room, but it went on beautifully without a hitch.

Phillip told The Cut in a March 22, 2021 interview that she and Richardson are expecting their first child together. Their baby girl is due in summer 2021.