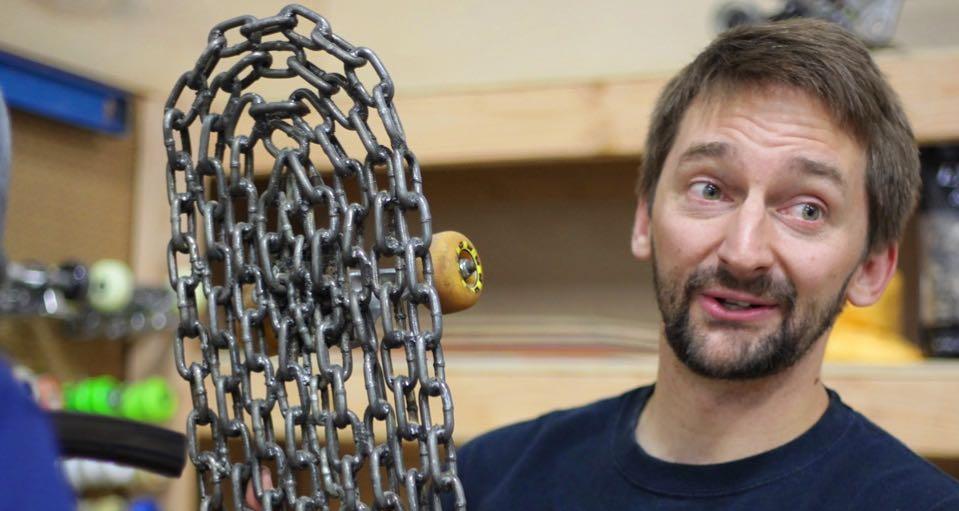 Aaron Kyro started skateboarding at the age of nine and hasn’t stopped since. Today, he is an expert skateboarder and teaches many kids through his YouTube channel, Braille Skateboarding. Part of the “Braille Army,” he’s also an entrepreneur who sells skateboarding merchandise and burns the midnight oil to popularize the sport. With a modest but growing net worth of $2.0 million and a wife who supports him, Kyro is all set to train the young skateboarders of the future!

Kids love Aaron Kyro, and he loves them right back. And it’s because they share the same all-consuming passion for skateboarding.

Kyro is a professional skateboarder who excels in his sport. He has taken upon himself the responsibility of making skateboarding popular among people, especially kids.

The pro-skateboarder is doing this because he believes that skateboarding is a healthy sport and a great way to get kids involved in something positiv, larger than themselves.

To achieve this, Kyro has been putting out vlogs on YouTube. He teaches and tutors kids on how to skateboard and enjoy every moment of this sport.

Here are some details from Aaron Kyro’s wiki.

How Old Is Aaron Kyro?

Born on September 10, 1983, in Denver, Colorado, Aaron Kyro’s age is 34 years. He grew up in Montana and began a love affair with skateboarding from a very young age. 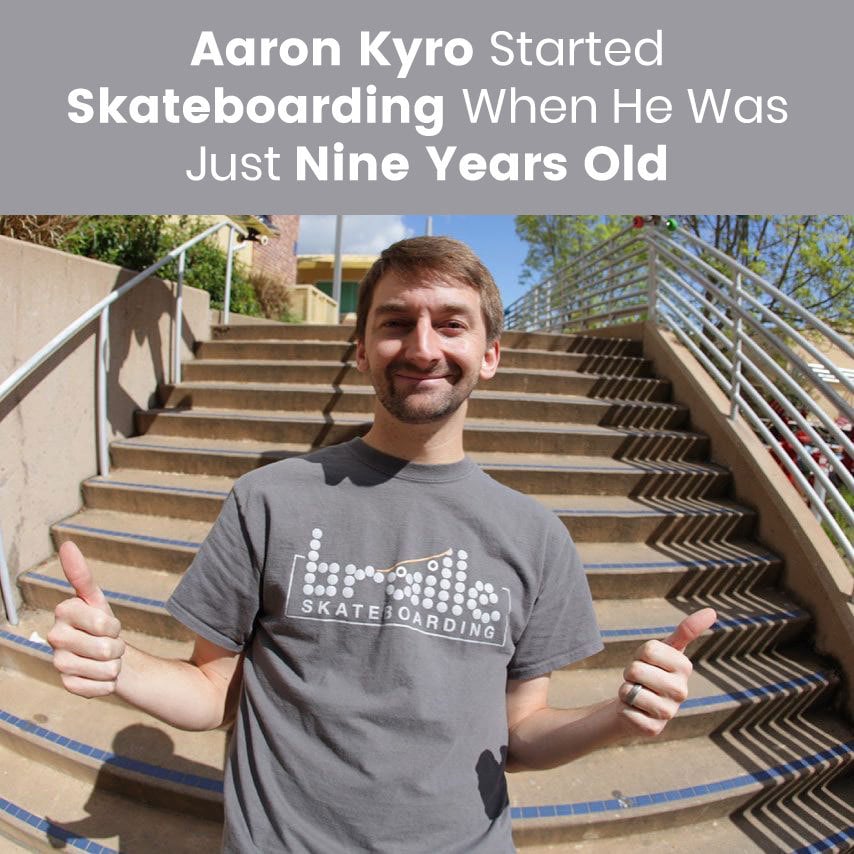 Kyro started skateboarding when he was just nine years old and developed a passion for it that has only grown over the years.

An All-Consuming Passion for Skateboarding

After graduating from high school, Kyro decided to take the path less traveled and devoted all his time to skateboarding. He attended college for a year just so that he could learn how to edit videos.

In 2001, he made his own videos to submit to sponsors, showcasing his skills on a skateboard. He became very well-known in the world of skateboarding and caught the attention of many sponsors and notable names in the industry, even though it took a lot of hard work and it was a long road to get there. Kyro had received $35,000 from sponsors from the city of Red Lodge to build a skate park for people in his community. He then wanted more for the sport on a larger scale.

Kyro Worked Hard to Get Sponsors

Kyro needed to make videos because he decided to pitch his idea about popularizing skateboarding to potential sponsors and get them to financially back his plans. He kept making these videos until 2005, but nothing fruitful happened.

Frustrated and tired with his efforts, Kyro finally made one last video and uploaded it onto YouTube, which was a fairly new medium at that time. But soon, his video started getting more views, and then went viral.

Many skaters saw his video and appreciated it. Word then got out that Kyro was a man with positive ideas and plenty of zeal.

He Began Teaching Skateboarding to Others

Kyro started making tutorials for people who wanted to be skateboarders and attracted attention from several sponsors. He did this because many kids loved skateboarding and wanted to indulge in it but did not have access (or often the funds) to get lessons.

Today, Kyro is well known as an expert skateboarder and teacher. Many kids are eagerly learning the sport by watching his much-appreciated tutorials on YouTube.

The skateboarding pro is now in a strong position. Kyro says that he no longer needs so many sponsors as he gets all the resources he needs thanks to YouTube. His YouTube channel was initially called Aaron Kyro, but he renamed it to Braille Skateboarding in 2007.

Kyro became a professional in 2014 for ReVive Skateboards, a company owned by one of his friends and fellow YouTuber, Andy Schrock.

Kyro Set Up a Skateboarding University

In 2017, Kyro launched the world’s first online skating school, Braille Skate University. It teaches its students (skateboard lovers) everything they wanted to learn about the sport, including many amazing skating tricks.

Among the courses taught at this university are how to start personal YouTube channels, filming and editing videos to upload online, and how to develop confidence and perform complicated but neat skateboarding tricks.

Given his total commitment to skateboarding and all the activities he’s involved in, people often wonder about Kyro’s personal life. They are curious to know if he has a girlfriend or wife in his life. 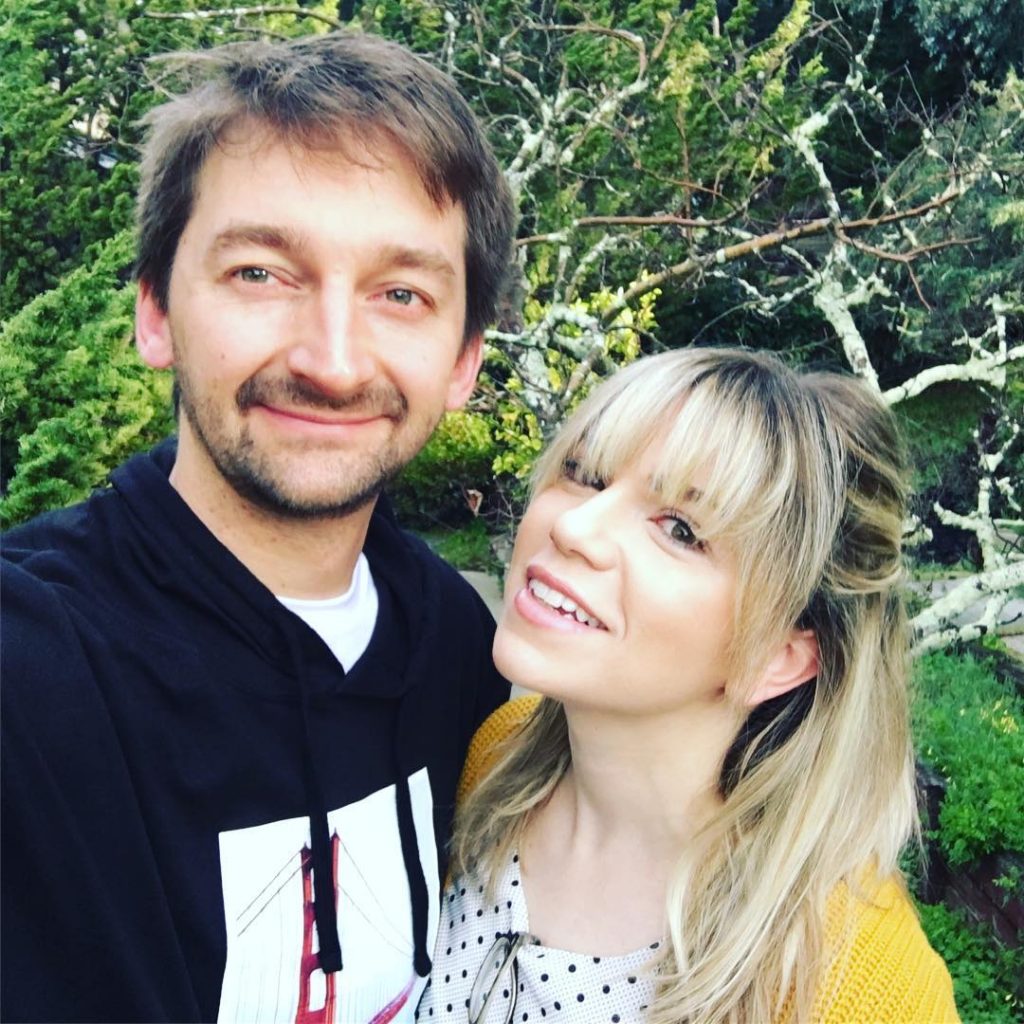 Kyro is married to a lovely lady called Danielle, who he met at a Scientology class that he took. Sparks flew instantly, and the two started dating each other, which ultimately led to their marriage in 2010.

Aaron Kyro is a Believer in Scientology

Kyro is a Scientologist, which means that he believes in the body of religious beliefs and practices as laid down by its founder, L. Ron Hubbard.

According to Hubbard, “Scientology means knowing about knowing, or science of knowledge.”

Even though Scientology is considered dangerous by many people, Kyro follows his faith with his customary earnestness.

He Has Utilized Social Media to His Advantage

Today, Kyro is a big name in skateboarding, thanks to his deft and wise handling of social media. His YouTube channel, Braille Skateboarding, has over 3.31 million subscribers. 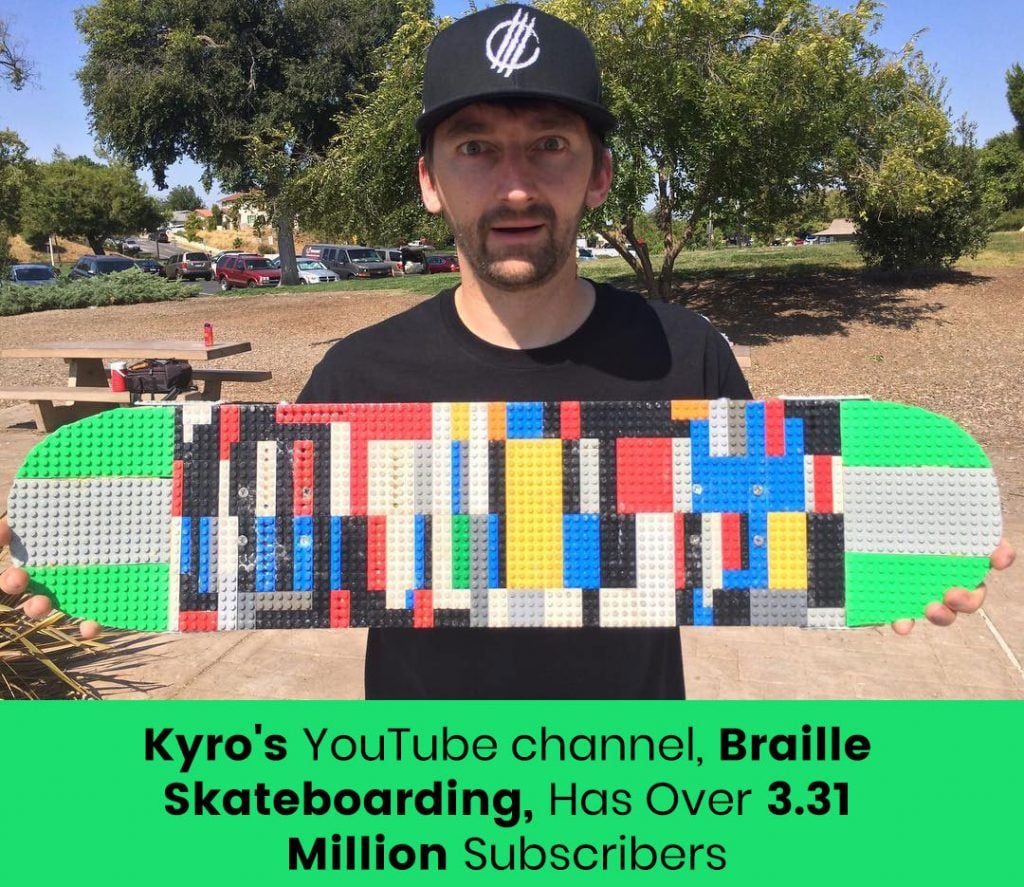 His subscriber count is increasing as more and more people take up skateboarding. The sport has developed a cult following all over the world, especially in the United States.

Kyro has created an Instagram account for Braille Skateboarding under the handle, @brailleskate. The tagline reads, “We teach people how to skateboard.”

It has over 425k followers and features various colorful skateboards and skateboarding rinks, Kyro teaching kids how to make deft moves on the rink, Braille Skateboarding merchandise, and Kyro with his friends doing what they love most—skateboarding!

Kyro also has a personal Instagram account under the handle, @aaronkyro, and it has over 330k followers. It has posts of Kyro doing complex stunts on skateboards, expert skateboarders showing off their skills, Kyro teaching students of all ages, and Braille Skateboarding merchandise.

In addition to being a skateboarding instructor, Kyro is also an entrepreneur. He has a company that sells merchandise like skateboards, T-shirts, hoodies, hats, helmets, wheels for skateboards, grip tape, enamel pins, skate tools, Braille handles for cellphones, and instructional CDs.

It’s a one-stop shop for everything a skateboarder may need, no matter whether he or she is a beginner or a veteran.

He Has a Modest but Growing Net Worth

Thanks to his business ventures, media appearances, earnings from YouTube, and the prize money he earns at various competitions, Aaron Kyro’s net worth is estimated to be around $2.0 million.

However, given his young age and skateboarding’s growing popularity all over the world, there is no doubt that Kyro’s net worth will definitely grow in the future.

Kyro Is Spreading the Gospel of Skateboarding

When Kyro isn’t skateboarding or spending time with his family, he is busy with his other interests like filming, photography, and snowboarding.

The pro skateboarder is determined and wants to reach out to more people and introduce them to the joys and benefits of skateboarding. And with his skill, passion, and positive spirit, there is no doubt that Aaron Kyro will succeed with his goal.