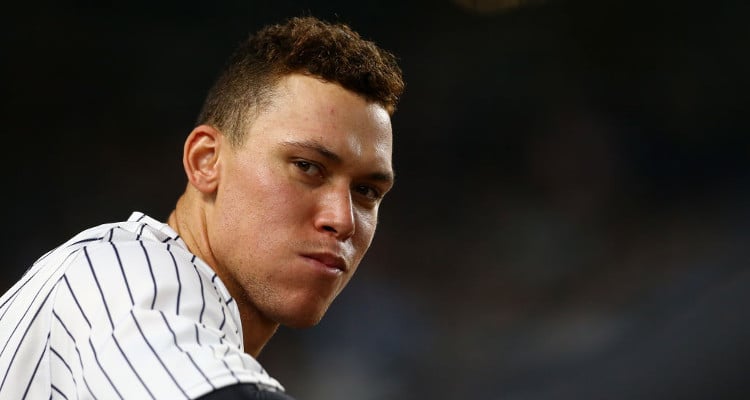 New York Yankees right outfielder, Aaron Judge hit the longest home run on Sunday against the Baltimore Orioles. The 25-year-old Yankee set a new record, after hitting a 496-foot home run! Aaron Judge leads the major leagues with 21 home runs this season. After beating the Orioles 14-3, the rookie sensation, Judge decided to show off some baseball swag in a Great Hambino, The Sandlot shirt. Judge revealed to MLB.com’s Bryan Hoch that he received the shirt in the mail. Read our Aaron Judge wiki to learn more about the Yankees’ record breaking hero.

Pro-baseball player Aaron James Judge was born on April 26, 1992 in Linden, California. He is the second adopted son of Patty and Wayne Judge, who were both teachers. The couple’s older son, John, also attended Linden High School. Aaron Judge showed brilliant baseball skills at an early age. He was a three-sport star in high school. Now, at the age of 25, Judge is professional baseball outfielder in the MLB for the New York Yankees.

The 25-year-old Yankee player is said to be dating Sterling Olmstead. Although the rumor hasn’t been confirmed, Judge posted a couple of pictures with Olmstead where they are seen holding hands.

Aaron Judge played on three sports teams in high school and displayed strong prospects of being a star athlete at the national level. As a teenager, he was a pitcher and first baseman for the baseball team, a wide receiver for the football team, and a center for the basketball team.

Although he excelled in every sport he tried his hand at, Judge decided to build his professional career as a baseball player. Soon, various prestigious college offers poured onto his lap, but he opted to enroll at California State University, Fresno. He played for the Fresno State Bulldogs in the Mountain West Conference.

His incredible talent did not go unnoticed as Louisville Slugger named him a Freshman All-American.

Aaron Judge was drafted by the Yankees in the first round of the 2013 MLB draft as the 32nd overall selection. His contract with the team included a signing bonus of $1.8 million. Judge made his professional debut with the Charleston RiverDogs of the Class A South Atlantic League in 2014.

He performed excellently during his debut, and impressed the Yankees enough that they promoted him to the Tampa Yankees of the Class A-Advanced Florida State League during the season. After that, Judge was promoted yet again to the Scranton/Wilkes-Barre RailRiders of the Class AAA International League. He later went on to represent the Yankees at the 2015 All-Star Futures Game.

Also Read: Tim Tebow: Net Worth & Facts to Know about the Quarterback-Turned-Baseball Player

The 25-year-old pro baseball player always had remarkable home runs. While in high school, he won the 2012 TD Ameritrade College Home Run Derby. In 2014, he hit nine home runs with 45 RBIs in 65 games for Charleston during his professional debut.

In 2016, during his second MLB game, Judge became the second player in Yankee history to hit a home run in each of his first two games, after Joe Lefebvre. On April 28, 2017, he had his first multi-home run game against the Baltimore Orioles.

Then on May 2, 2017, Aaron Judge hit two home runs against the Toronto Blue Jays, giving him 12 through 25 games. With that feat, he became the third Yankees player to hit at least 12 home runs through the team’s first 25 games. And, the following day, he set another record as the youngest player to hit 13 home runs within the first 26 games of a season! This kid’s unstoppable!

While playing against the Oakland Athletics on May 28, Judge hit his first career grand slam. He led the Yankees to victory by a landslide of 9-5.