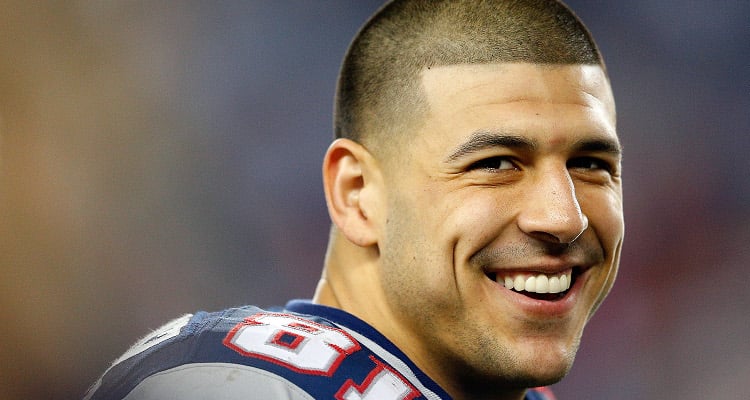 Former New England Patriot and a convicted murderer, Aaron Hernandez killed himself in prison on Wednesday (April 19). After a Bible verse was found written on his forehead, more questions have been raised about his death.

It was a shocking scandal when the football star with a bright future turned into a murderer. Aaron Hernandez shot another football player, Odin Lloyd for which he was convicted. Less than a week after he was acquitted of another double-murder, Hernandez was found dead in his prison cell. New details about his death have raised more questions. Authorities revealed Hernandez had a Bible verse scrawled on his forehead. Prison officials also noted that he also didn’t show suicidal tendencies. So, a very important question is raised: did Hernandez kill himself, or was Aaron Hernandez murdered in prison? Here are more details on Aaron Hernandez’s death.

The Bible Verse on His Forehead

As new details of Aaron Hernandez’s death continue to surface, a CBS News affiliate in Boston broke the news that the deceased convict had a Bible verse scrawled on his forehead. According to a source who broke it to the media, Hernandez had “John 3:16” written on his forehead with a marker.

One of the most widely quoted verses from the Christian Bible, the verse is from the Gospel of John and reads, “For God so loved the world that he gave his one and only Son, that whoever believes in him shall not perish but have eternal life.” The report also said an open Bible was found in his prison cell.

The news outlet reported that the verse was written in “blood red marker” on his forehead. The red marker was also used to draw markings on his hands and feet. Based on the evidence, reports suggest that Hernandez was attempting to draw stigmata markings before hanging himself.

Since he didn’t leave a suicide note behind, many are wondering if this Bible verse and the markings can explain why Aaron Hernandez killed himself. Or could his behavior have been related to something else? The authorities investigating his death believe that Hernandez may have smoked a synthetic marijuana called K2 just hours before he died. People who have used K2 have noted bizarre side effects including, but not limited to, erratic behavior.

The former NFL tight end’s agent and lawyer have both insinuated that his death may not have been a suicide. His family said there was no indication of suicidal tendencies. Jose Baez spent 10 months defending his client in court and won his acquittal in a double-murder case on April 14. He released a statement alleging that Hernandez’s death may have been orchestrated within the prison walls.

“The family and legal team is shocked and surprised at the news of Aaron’s death,” said Baez who also represented the defendant in the Casey Anthony case. “There were no conversations or correspondence from Aaron to his family or legal team that would have indicated anything like this was possible. Aaron was looking forward to an opportunity for a second chance to prove his innocence.”

He requested authorities to conduct a thorough investigation into Hernandez’s death also saying that the Baez Law Firm would be investigating the incident. The maximum-security prison where Hernandez was serving his sentence has previously reported a number of problems.

Hernandez’s former agent, Brian Murphy, also doesn’t believe that the tight end killed himself. However, the Massachusetts Department of Corrections disagrees. “Mr. Hernandez was in a single cell in a general population housing unit. Mr. Hernandez hanged himself utilizing a bed sheet that he attached to his cell window. Mr. Hernandez also attempted to block his door from the inside by jamming the door with various items,” they told the media.

Absolutely no chance he took his own life. Chico was not a saint, but my family and I loved him and he would never take his own life.

With his suicide, Aaron Hernandez died acquitted of the two homicides he was charged with, while still serving a life sentence. A legal doctrine in Massachusetts, “abatement ab initio,” is applied wherein criminal convictions are essentially nullified if a person dies before they have exhausted all means of clearing their name. Essentially, with Hernandez dying before he could file an appeal in the Odin Lloyd case, the case reverts to being as if the first trial never happened.