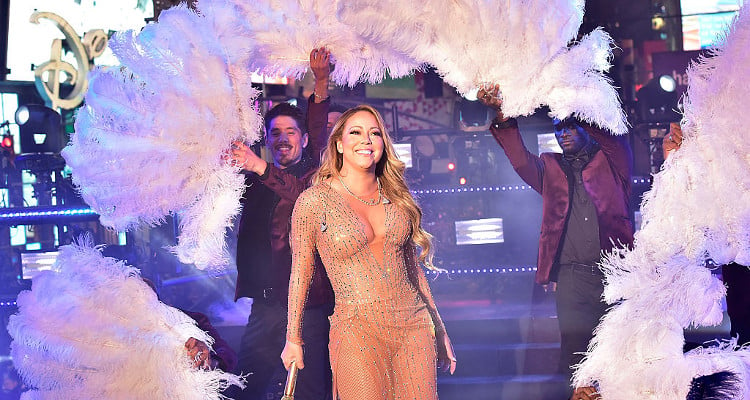 Mariah Carey has jumpstarted the 2017 trend for memes with a disastrous lip-sync fiasco at Dick Clark’s New Year’s Rockin’ Eve 2017. Carey’s performance is now the subject of Internet trolls.

Mariah Carey suffered a performance snafu at Dick Clark’s annual Rockin’ New Year’s Eve concert. On the last night of 2016, Carey was performing at the annual event from New York’s Times Square when it all went haywire. She started off with a beautiful rendition of “Auld Lang Syne” and was prepared to sing her songs “Emotions” and “We Belong Together” when there were visible audio malfunctions. Carey was visibly frustrated and resorted to giving a commentary on stage while the high notes she is famous for played in the pre-recorded track.

Carey was suffering technical troubles with her earpiece, and she couldn’t find her place in the song. Her team reportedly complained to the Rockin’ New Year crew about the technical issues, but she was assured it would be fine once she’s on stage. However, apparently, the problems continued. Hence, she opted to “let the audience sing” while the audio track played on. Carey’s dancers continued their routine through the train wreck performance. The technical issues continued into her next song, “We belong together”. Carey seemingly imploded, saying “It just doesn’t get any better”  frustratedly at the end of her set and walking off in a manner that can resemble a Justin Bieber mic drop moment.

Different sides of the story have surfaced. Carey’s side alleges that the producers of Dick Clark’s Rockin New Year’s Eve sabotaged her performance to boost the show’s ratings. On the other hand, the producers claim there were no technical problems and the “All I want for Christmas” singer hadn’t rehearsed enough. Both sides are unapologetic and playing the blame-game but whatever the truth is, Mariah Carey has started 2017’s first meme trend. Mariah Carey’s walk out has summarized how many feel at the end of 2016. Social media has already gone abuzz taking jabs at Carey’s NYE fiasco. These memes on Mariah Carey’s New Year Eve performance will give your 2017 a laughing start. Watch Mariah Carey’s disastrous New Years Eve performance video below.

#1 An artistic representation of the terrible end to a terrible year.

#3 When you listen to that little devil on your shoulder.

[Mariah Carey]: sing for the audience

#4 Our reaction to Carey’s performance

Mariah Carey's disgusted sign off after her disastrous performance is basically us to 2016 https://t.co/NPbuH53UDu

#6 A little nudge to the other lip-syncing pop divas out there.

Mariah Carey's singing is so powerful, it can be heard coming from her mouth when it's not open.https://t.co/4WNeyybYh7

#7 Waiting for Carey and Hillary Duff to come out with the Lizzie McGuire sequel.

#8 Britney Spears has nothing on Mariah Carey.

#9 When your presentation is due and you decide to just wing it.

I feel like mariah carey set the bar for 2017 really low so now we're all gonna look good next year. Thank you queen of sacrifices

Ohio State Football: Well that may have been the worst New Years Eve performance ever..
Mariah Carey: Hold my beer…#nye2016

#15 This one person accurately pointed the true performer.