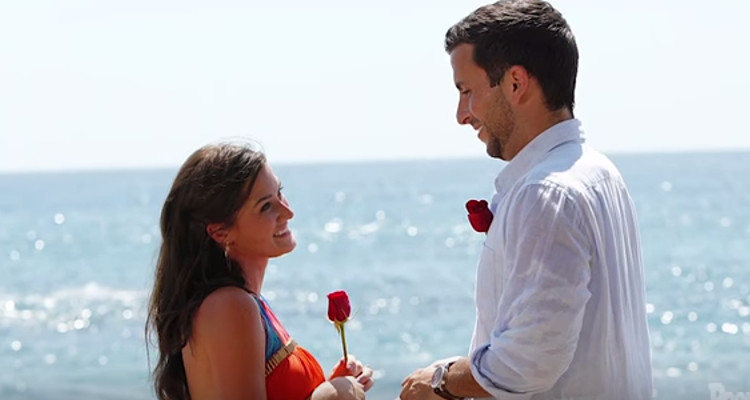 The Bachelor drama never seems to cease! After the other girls found out about Nick Viall’s steamy one-night stand with Elizabeth “Liz” Sandoz, claws are sure to come out. Until we wait for the next episode of The Bachelor, let’s find out what happened at Jade and Tanner Tolbert’s wedding.

Nick Viall’s hunt for love continues, as we still have to see which of the 18 contestants will remain during the rose ceremony that we missed during The Bachelor episode two. Following a whirlwind episode that showcased what looked like a big fun group date, it has been reported that Lacey Mark, Hailey Merkt, and Elizabeth Whitelaw were sent packing. However, all we know for sure is that Liz Sandoz, who had a one-night stand with Viall during Jade and Tanner Tolbert’s wedding party last year, went home dejected, after she let the cat out of the bag.

6 months down. That's like 6 years in bachelor time. And it's been the best 6 months of my life. Crazy to think it's already been that long. Here's to many more with you babe. Love you @jadelizroper

I guess I'm not surprised my top 9's pics of our wedding and of our house, because our relationship has been the focus of 2016 for us. 😍 So many big life changes this year!! Sometimes l feel like life is happening so quickly and I can't keep up, but that's why I'm so lucky to have Tanner. He is my rock through everything. Even though 2016 was our best year yet, I can't wait to see what 2017 holds for us, @tanner.tolbert! ❤

Tolbert appeared in season 11 of The Bachelorette, and competed for Kaitlyn Bristowe’s affections. He went on to Bachelor in Paradise, where the gorgeous Jade Roper nursed his broken heart. Long story short, the two quickly realized that they were made for each other, got engaged during the season finale, and had an elaborate wedding last year. At the time, the glowing bride told People, “It blew my mind. I loved the mood. It was exactly the way I had envisioned it.”

Not everything's been bad in 2016, in my opinion. 😉💕 @tanner.tolbert #jannerforever

The former contestants of ABC’s hit matchmaking franchise said their vows in front of family and friends in a lavish ceremony held at the St. Regis Monarch Beach at Dana Point, California. Jade Roper and Tanner Tolbert made millions of The Bachelor viewers get teary-eyed during the two-hour televised special. Host Chris Harrison, who officiated the ceremony, went so far as to say that Jade and Tanner’s wedding was the “single largest gathering of Bachelor alumni in history.” During the ceremony, an emotional Tolbert confessed, “I was just trying not to cry. It was such a crazy rush of emotions.”

Beautiful women in beautiful dresses. I wanted something a little different and I fell in love with these gowns for my bridesmaids. Don't they look flawless? Dresses by: @kellyfaetanini #JannerForever #TheBachelor Photo: @johnandjoseph

Naturally, Jade and Tanner Tolbert’s wedding photos were breathtaking and definitely gave Janner fans #relationshipgoals, as the blushing bride gracefully glided down the aisle toward her handsome husband. Jade Roper wore a gorgeous custom-made gown by designer Galia Lahav, which featured a beautiful lace bodice, plunging neckline, and a stunning train that seemed to go on for miles. Tolbert admiringly exclaimed, “She looked gorgeous. It was a mix of elegance and sexiness.”

The star-studded event boasted wedding guests such as former reality stars of The Bachelor franchise, including Roper’s BFF on Bachelor in Paradise Carly Waddell. Among those in attendance were Ashley I. and Ashley S., as well as Tolbert’s homeboys from season 11 including Ben Z., JJ Lane, and —wait for it—Nick Viall. Singer Seal serenaded the newlyweds during their first dance, with his hit song “Kiss from a Rose.” In an interview, Tolbert gushed about Seal’s performance saying, “It was awesome,” while Roper added, “When he walked out, it was all foggy – all you could see was a silhouette. Then the song hit and I couldn’t believe it was happening. That was a really cool moment.”

Post wedding festivities continued until the wee hours of the morning, and a visibly excited Tolbert praised his lovely wife saying, “Jade is the woman I always envisioned. She makes every day more fun,” while Roper chimed in, “It’s crazy how marriage does change everything. We’re a family now. And it feels like everything is complete.” We hope all The Bachelor fans who tuned in to watch the wedding kept a box of tissues handy!

Jade and Tanner Tolbert kept their wedding party traditional, and had their close friends as bridesmaids and groomsmen. Almost like a sister to Jade Roper, The Bachelor season 21 contestant Liz Sandoz was the maid of honor, looking radiant in a gold and blush gown designed by Kelly Faetanini. At the time, no one imagined that Jade and Tanner Tolbert’s maid of honor would embark on a journey of her own to find love, potentially with thrice-rejected The Bachelor alum, Nick Viall. Apparently, the two shared quite the night as they slept together after Jade and Tanner Tolbert’s wedding party in January 2016.

This photo improves my Monday mood significantly. All the feels. 💕👦🏻👰 #iwillneverstoppostingweddingpics #jannerforever

Enamored by the gorgeous Liz Sandoz, Nick Viall asked for her phone number following their steamy encounter, only to be shot down… until Sandoz showed up on the season 21 premiere episode of The Bachelor! The surprising revelations came to light almost nine months after the wedding, when 29-year-old Sandoz who is a Las Vegas-based doula, confided the truth in a fellow contestant Christen Whitney to “clear the air and move forward.” Unfortunately, things did not end well for Sandoz, as what could have been a romantic story to tell their grandchildren became an awkward conversation resulting in Liz Sandoz being sent home.

My life would be incomplete without these sassy ladies (including Pippa of course). 👯#nationalbestfriendday #jannerforever #thebachelorette #thebachelor #bachelorinparadise

Meanwhile, the happily married Jade and Tanner will soon be celebrating their first wedding anniversary. Judging by the attractive couple’s photos on Instagram, it definitely doesn’t look like Jade and Tanner Tolbert are going the way of other failed Bachelor relationships.

A little #tbt to signing our marriage certificate with the one and only @chrisbharrison and my maid of honor @esandoz. 💕 #JannerForever #bachelorinparadise